Ed Menta, the James A.B. Stone College Professor of Theatre Arts, is this year’s recipient of the Lux Esto Award of Excellence, which honors an employee who has served Kalamazoo College for 26 or more years for a superlative record of stewardship and innovation.

Menta, a faculty member since 1986, has directed dozens of productions at K, including award winners such as last year’s college debut of “Fun Home.” K’s staging of the Tony Award-winning musical, co-written by Lisa Kron ’83, was selected for a featured performance at the Region III Kennedy Center American College Theater Festival in January 2018.

Nomination letters by students, faculty, staff and alumni praised Menta for what they said has been his dedication to teaching, his efforts to build and bolster the theater community at K and across Kalamazoo, and his willingness to take on challenging and culturally relevant works that expand the horizons of actors and audiences.

In presenting the award, President Jorge G. Gonzalez cited a nominator who wrote that “Ed’s mark on the College is simply indelible.”

Provost Mickey McDonald, who after 10 years is leaving the College to assume the presidency of the Great Lakes Colleges Association, gave the keynote address for Founders Day, reflecting on how being a “fellowship in learning” — a concept that originated during the 1922-1935 presidency of Allan Hoben — has allowed K to navigate decades of challenges and changes.

“This has been an amazing, rewarding 10 years for me,” McDonald said. “I have witnessed Kalamazoo College continue to become a more equitable place to live and learn and work … and I have relished being part of a fellowship of learning that embraces a sense of innovation. That ability to change, to adapt, to reflect — as we are reflecting today —  is an essential part of what has kept Kalamazoo College vital and relevant for almost 200 years. And I have every confidence that it will sustain the College as it enters its third century.” 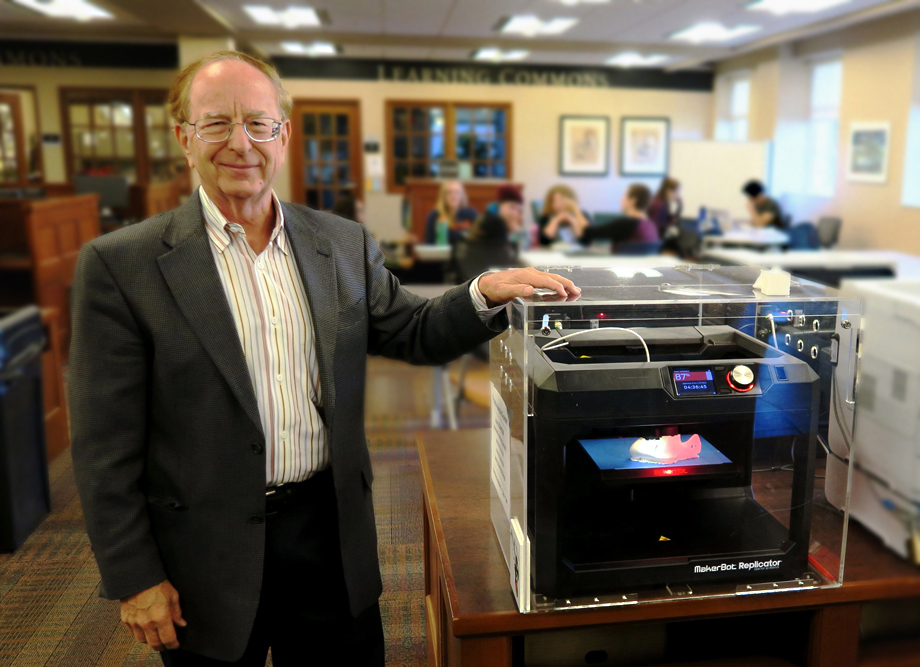 Harry Garland ’68, Ph.D., is pictured in Upjohn Library Commons with one of the several MakerBot 3D printers Kalamazoo College was able to purchase thanks to a donation from Garland for that purpose. The picture was taken last October when Garland visited campus and discussed the various uses of the printers with Josh Moon, educational technology specialist in the Information Services division. “3D printing offers students technology that can create physical examples of their designs, art projects, models and historical artifacts,” said Josh.  “It also lets them engage with a community of digital designers who are sharing their work with others for scholarship, productivity, and fun.  As a young, experimental tool the MakerBot is available to all classes and students for exploration.” Garland’s gift combines his love of technology and his love of K. As an undergraduate here he developed superior analytical and problem-solving skills that became a foundation for a distinguished career that has included writing three books, being awarded 20 patents, serving on K’s board of trustees, teaching at Stanford University, and co-founding three businesses, including a 400-employee firm that made an immediate precursor to the first personal computers.

Associate Professor of Biology Binney Girdler knows about bees and Beebots. She teamed up with Woodward Elementary School first grade teacher Jenn Rice and won an “Inspired Learning Grant” through the Learning Network of Greater Kalamazoo. The grant will help pilot a new program at Woodward: little bee shaped robots called “BeeBots” that help to teach the basic skills of computer programming. The little robots will help student learn about spatial awareness, sequencing, counting and more.

Girdler certainly is looking towards the future, “If the BeeBots program at Woodward gets a lot of buzz, we would like to apply for more funding to follow a cohort of these students through their Kalamazoo Public School careers. We’d like to make available in their middle schools and high schools even more sophisticated programming tools and environments, and foster a peer-mentoring program that extends all the way to college.”

The two teachers’ winning proposal included a delightful video about the program’s potential. Click the VIEW ENTRIES button to see the video. Text by Mallory Zink. Photo by Keith Mumma. 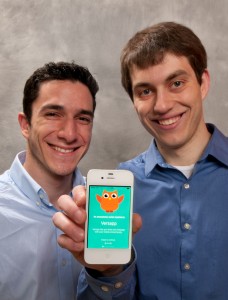 Users of a new social media application developed by two K juniors no longer have to worry about not having a second chance to make a first impression with its concept of anonymous interaction.

Versapp, a social media application combining anonymity and community, was developed by Giancarlo Anemone ’15 and Will Guedes ’15 with the help of angel investor Trevor Hough ’08.

Launched last month for the iOS platform, with an Android version to follow, Versapp allows users to send a message using their friends list to initiate a conversation while remaining unidentified using the one-to-one chat feature. Or, users may participate in a group message where the participants are known but the comments remain anonymous.

Read more about Will, Giancarlo, and Trevor in an article by Rachel Weick in the August 8, 2014 edition of Grand Rapids Business Journal.

A liberal arts education is an education for life–in all its various aspects. In fact, because life is so multifaceted, it’s hard to imagine an educational model more effective than the liberal arts. It’s this fact that makes various myths about a liberal arts education–such as the notion that it’s impractical–so pernicious. S. Georgia Nugent, senior fellow at the Council of Independent Colleges (CIC) and former president of Kenyon College, writes a column on the value of the liberal arts education. An autumn post of hers debunks many of the pernicious myths, including elitism, prohibitive expense, debt, impracticality, and weaker employment prospects. In a more recent post about college graduates in STEM fields (science, technology, engineering, and math), Nugent notes that America’s small, private, liberal arts colleges are more successful than large research universities graduating science majors and preparing students for doctorates in STEM fields. The results of a recent CIC report she cites suggests that liberal arts colleges provide more bang for the buck when it comes to producing STEM graduates. The Council of Independent Colleges represents more than 600 small private colleges around the country, including Kalamazoo College.

The Goods are dead, but their good’s alive! Walter and William Good, both members of the Class of 1937, have been deceased from some time, but their legacy lives at the Kalamazoo Air Zoo. The Goods created the Guff, the first successful radio controlled aircraft, and a replica of the aircraft is now on permanent display at the Air Zoo. The aircraft was created with vacuum tube-based control units; it won first place in the 1939, 1940, and 1947 R/C Airplane Nationals. The original plane resides at the Smithsonian National Air and Space Museum. The Good brothers graduated from K with bachelor’s degrees in physics, and they then went on to earn doctorates in the subject.

Caleb Kline ’13 has been posting green gains on the College’s Sustainability Web site. It’s worth a look-see. One of his latest articles describes the installation of VendingMisers. The devices allow vending machines to power down when no one’s around. Their installation in the campus’s 11 beverage vending machines will reduce the College’s carbon footprint by an estimated 5,000 pounds of carbon dioxide annually. Keep current with Caleb by checking out Sustainability regularly.

Nahrain Kamber ’01 is an associate scientist and solutionist at Dow Chemical Company. She describes her scientific journey on YouTube. Today she applies discoveries in polymer chemistry to the creation of new products for people.

Péter Érdi, Psychology and Complex Systems Studies, was a keynote speaker and a round table participant at the European Meetings on Cybernetics and Systems Research that took place at the University of Vienna in April.

His talk was a memorial lecture on Luigi Ricciardi, a longstanding participant in the EMCSR, against the background of the development of systems thinking in biology. The round table in which Érdi participated focused on the past, present, and future of cybernetics and systems research.

Students from Kalamazoo College worked together to build their mental endurance and speed in anticipation of a big test held Oct. 21-22. No, not mid-terms—the 36th annual Association for Computing Machinery International Collegiate Programming Contest sponsored by IBM. Regional competitions for the so-called “Battle of the Brains” attracted tens of thousands of students from schools in about 90 countries on six continents, all with the same dream to walk away with prizes, scholarships, job opportunities, and a coveted spot among the top 100 teams invited to the World Finals in Poland in May 2012.

Two Kalamazoo teams competed against the smartest collegiate IT talent from 122 colleges and universities in Michigan, Indiana, Ohio, Pennsylvania, and Ontario, including teams from MSU, UM, Purdue, Notre Dame, and Ohio State. Each three-student team applied its programming skills to solve complex real world problems under a grueling five-hour deadline huddled around a single computer.

“The two ‘K’ teams did great,” said Pam Cutter, associate professor of computer science. “We had seniors through freshmen participating.”

“We’re proud of their effort and for standing up to the ‘big schools.’ It was time well spent and a great learning experience for all.”

Check out the final results!