The research will examine the evolutionary origins of two interacting protein molecules, the beta-secretase enzyme (BACE1) and the amyloid beta (A-beta) sequence within the Amyloid Precursor Protein (APP). The findings will further the general understanding of key Alzheimer’s proteins, specifically how and when they evolved their pathogenic interaction. 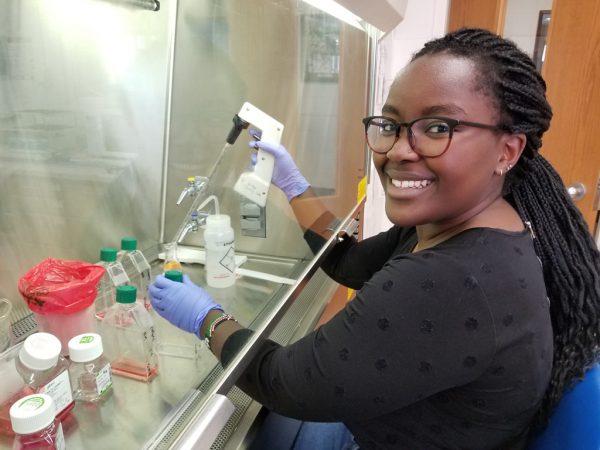 Langeland said such work will have no direct therapeutic application and won’t offer a specific cure for the degenerative brain disease. It could, however, lead to future research toward such outcomes. The immediate impact of the grant is the recruitment of underrepresented minorities and first-generation college students to work on the project.

Bright and motivated K students generally are recruited by word of mouth for such projects, which can inspire their senior individualized projects (SIPs). Such a setup provides students with hands-on experience and independent scholarship, which are two of the four key tenets to the K-Plan, Kalamazoo College’s distinctive approach to an education in the liberal arts and sciences.

The grant, worth a total of $444,941, also represents a rare opportunity for students to participate in research with, and benefit from, two professors with varied expertise. Langeland works with molecular genetics, developmental biology and evolution, and Moore is a neurobiologist who examines neurodegeneration and cell death in particular diseases.

Moore said, “This grant is unique in its interdisciplinary approach to a neurodegenerative disorder. Most scientists in the Alzheimer’s field are focused on molecular mechanisms, not evolutionary context. It’s only at a liberal arts college that you can you find professors with such disparate backgrounds working together with students on a project like this. It’s a perfect confluence of skillsets.”

Both professors said the grant represents the culmination of about 10 years of partnering to secure such funds and opportunities for students, providing a satisfaction unsurpassed in their careers. The fact that the two are friends as well as colleagues makes this research particularly satisfying. It also continues a notable year for K’s Biology Department, which has been involved with:

NSF is an independent federal agency created by Congress in 1950 to promote the progress of science and advance national health, prosperity and welfare, making such research and developing future scientists a priority. For more information on NSF, visit its website.