Kalamazoo College’s efforts to get science majors experience in student research, one of the most important factors in providing them an exceptional start in their post-college careers, just got a big boost. 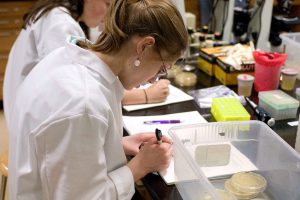 A $247,500 grant from the Sherman Fairchild Foundation will boost the availability of summer student research experiences for K biology, chemistry and physics majors.

The Sherman Fairchild Foundation will provide $247,500 to fund stipends of $4,000 apiece for students in biology, chemistry and physics to conduct research in summer. The three-year grant will also provide up to $1,500 apiece for students to attend scientific conferences to present their findings and to offset the cost of supplies, said Associate Professor of Physics Arthur Cole, who will serve as director of the project.

The student research beneficiaries, 15 each summer, will include both rising seniors working on their Senior Individualized Projects (SIPs) and younger students, allowing them to get early exposure to life in the lab before deciding whether to pursue science as a career, Cole said. He worked with Assistant Professor of Biology Santiago Salinas, Assistant Professor of Chemistry Dwight Williams and Anne Dueweke, director of grants, fellowships and research, to conceptualize and develop the grant proposal.

“It gives students an earlier chance to seek out research experiences,” Cole said. “A lot of times you think you want to go into the sciences and you don’t know what research is like until you get to try it.”

He said the grant also will make it possible for those who support themselves while attending the College to concentrate on student research, rather than having to seek summer jobs, and could open doors for members of groups who are underrepresented in the sciences.

Salinas said summer research as an undergraduate played a major role in his own decision to become a scientist and professor.

“It’s more than what’s in the textbook,” he said. “They start to see the bigger picture. And they get to try things. It’s how they learn. And it’s fun.”

For those who do decide to pursue scientific careers, Williams said, the opportunity to get early research experience can give them a “leg up” on getting further grants and research opportunities.

“It’s a great way for us to get more students involved in research, particularly with an emphasis on first- and second-year students, instead of waiting until they’re seniors working on their SIPs” he said.

Though most of the research that the grant funds will involve students working with professors on the College’s campus, it will also provide support for up to three K students a year to participate in research at other institutions, Cole said.