Kalamazoo College recently appointed five faculty members as endowed chairs, recognizing their achievements as professors. Endowed chairs are positions funded through the annual earnings from an endowed gift or gifts to the College, and reflect:

“Being given a named endowed chair is an honor for both assistant and full professors,” said Furge, K’s interim provost. “In the former case (Carroll, Salinas and Williams), it signals promise and affirmation of their early contributions to teaching, scholarship and service that will be the foundation for carrying the mission of K well in to the 21st century. In the latter case (Tan and Furge), it provides recognition for a lengthy record of outstanding contributions to scholarship, teaching and service that bring national attention to our programs and institutional outcomes. All faculty at the College bring strengths to their respective programs. It is one of the joys of joint endeavor to celebrate achievements by giving a faculty member an endowed chair.” 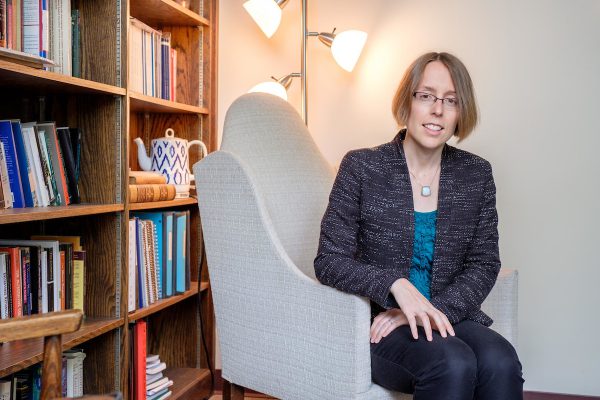 Carroll, an assistant professor of history, focuses her work on modern Europe and more specifically on the history of modern French colonialism. She’s interested in observing how the memory of the Napoleonic empire affected popular and political ideas regarding colonial empires in the second half of the 19th century. She teaches a variety of classes on modern Europe and its empires along with a class on the modern Middle East.

The 2018-19 academic year is Carroll’s third at K. Before arriving, she had a one-year visiting position at Colgate. She earned a bachelor’s degree from Vassar College, and a master’s degree and Ph.D. at the University of North Carolina-Chapel Hill. She will hold the title of the Marlene Crandell Francis Assistant Professor of History, which recognizes an entry-level scholar with demonstrated achievement and exceptional promise, for three years.

“It was a great honor to be named the Marlene Crandell Francis Chair,” Carroll said. “The research funds associated with the position will enable me to return to France and continue to pursue my research. I can then, in turn, bring that research into the classroom by incorporating new primary sources that I have found or new insights from scholars that I have met while abroad. The chair thus will help me continue to develop as both a scholar and as an educator.” 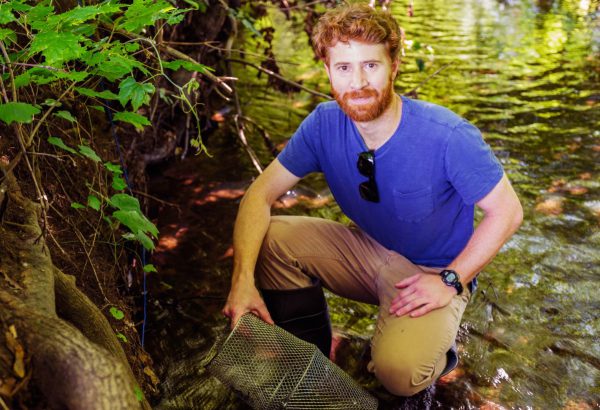 Salinas, an assistant professor of biology, teaches classes such as vertebrate biology and human physiology. His research interests include his work in the K Fish Lab, where he and his student collaborators study the ways fish populations cope with changes in the environment.

Salinas was born in Argentina and attended the Lester B. Pearson United World College of the Pacific. He earned his bachelor’s degree from College of the Atlantic and a Ph.D. from the School of Marine and Atmospheric Sciences at Stony Brook University. Salinas then was a post-doc at the University of California-Santa Cruz and the Southwest Fisheries Science Center. He was a visiting assistant professor at the University of the Pacific.

“I’m thrilled to receive this honor,” Salinas said. “It will undoubtedly help me engage more young biologists in research and continue to try to innovate in the classroom.”

The Roger F. and Harriet G. Varney Assistant Professor of Biology title is awarded on a rotating basis to faculty in the natural sciences to recognize teaching, scholarship and service. Salinas will hold the title for three years. 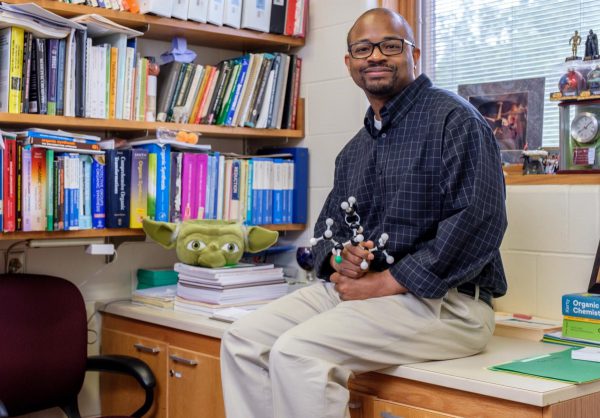 He spent a year as a lecturer at Longwood University before becoming an assistant professor at Lynchburg College, finding a passion for the synthesis and structural characterization of natural products as potential neuroprotectants. He extended his knowledge in those subjects after accepting a National Institutes of Health postdoctoral research fellowship at the Virginia Commonwealth University Medical College of Virginia Department of Pharmacology and Toxicology. During that fellowship, he worked in medicinal chemistry and pharmacology, where his work was published in six peer-reviewed journals.

“Receiving this honor has provided me with the motivation to continue to explore and implement innovative ways to connect with our students both inside and outside the classroom to build lifelong relationships that last beyond their four years.”

The Roger F. and Harriet G. Varney Assistant Professor of Chemistry title is awarded on a rotating basis to faculty in the natural sciences to recognize teaching, scholarship and service. Williams will hold the title for three years. 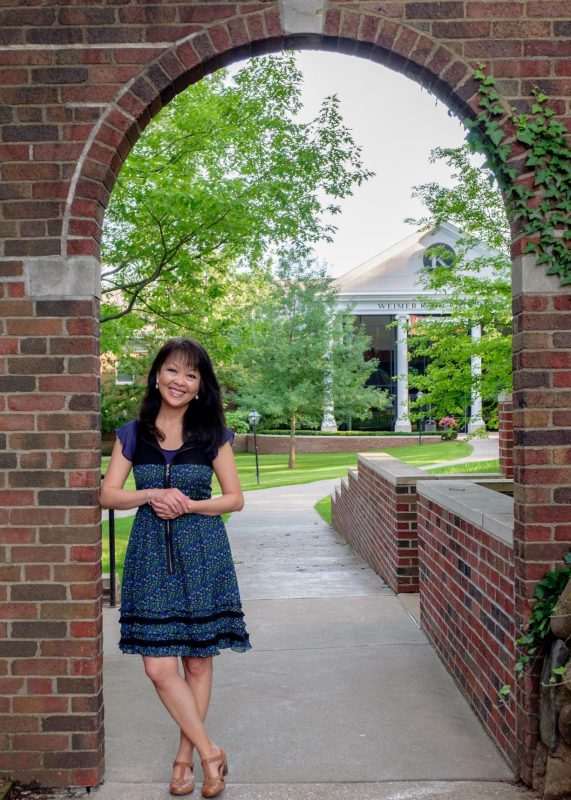 Tan earned undergraduate degrees in music and piano pedagogy at Pacific Union College before completing a Ph.D. in psychology at Georgetown University. She has taught psychology courses at K since 1998, receiving a Michigan Campus Compact award for civic engagement pedagogy in 2007 and the Lucasse Award for Excellence in Teaching in 2012.

Tan has published more than 25 journal articles and chapters, and two books titled “Psychology of Music: From Sound to Significance” (from Routledge) and “The Psychology of Music in Multimedia” (from Oxford University Press). She is currently working on “The Oxford Handbook of Music and Advertising.”

At K, she has served as a chair for the College’s 2013 reaccreditation, chair of the faculty development committee, and social science representative on the faculty executive committee. In her field, Tan serves on the board of directors of the Society for Music Perception and Cognition, and she is active in bringing music psychology across disciplines and to the public through activities such as her role in “Score: A Film Music Documentary” and its related podcast.

The James A. B. Stone College Professor title recognizes a senior faculty member for excellence in teaching, scholarship and service to the institution. Tan will hold the title for seven years.

“I was surprised and speechless when I was given the good news about this endowed chair,” Tan said. “It couldn’t have come at a better time, as my work focuses on the role of music in film, and I’ve become increasingly aware of the importance of a multidisciplinary approach to research in this area. The James A. B. Stone endowment will provide the resources needed to collaborate with a great team of colleagues from several disciplines to pursue this exciting work on a more comprehensive scale, and I am very grateful for this gift.” 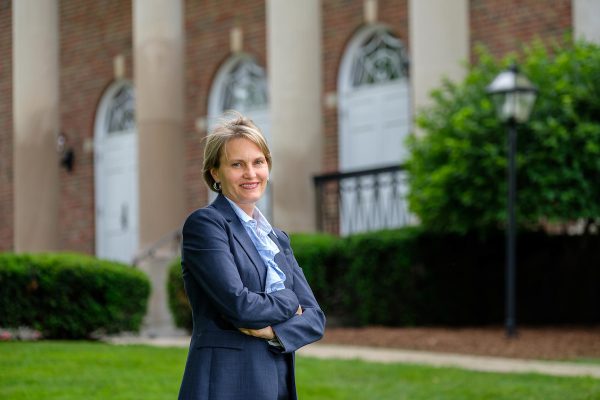 As the interim provost in the 2018-19 academic year, Furge is the College’s chief academic officer. She oversees all educational affairs and activities including academic personnel and programs. She also oversees academic support and co-curricular areas such as Athletics, the Center for Career and Professional Development, Information Services, Institutional Assessment and Faculty Grants, the Center for International Programs, the Mary Jane Stryker Center for Civic Engagement and the Arcus Center for Social Justice Leadership.

Furge joined Kalamazoo College in September 1999 and has taught courses in biochemistry, advanced biochemistry, organic chemistry, general chemistry, toxicology and carcinogenesis, and a first-year seminar regarding cancer origins, stories and legacies. Furge’s research centers on the enzyme catalysts known as cytochrome P450 enzymes that catalyze drug metabolism reactions. Her research seeks to understand variations in the activity of cytochrome P450 that can lead to unfavorable drug-induced events.

Furge earned a Ph.D. in biochemistry from Vanderbilt University in Nashville, Tennessee, in 1998, and then completed a post-doctoral fellowship with Nobel Laureate Stanley Cohen. She also earned a bachelor’s degree in biochemistry with a minor in history from Oberlin College in Oberlin, Ohio, in 1993.

The Dorothy H. Heyl Professor of Chemistry title recognizes Furge’s teaching, scholarship and service record. She will hold the title through the duration of her career at K.