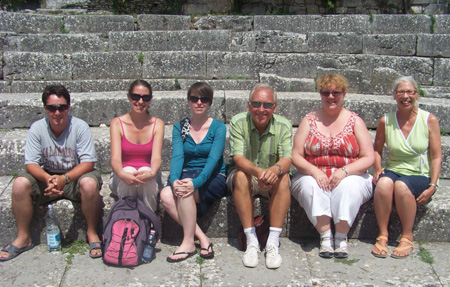 Kalamazoo College alumni enjoyed a K faculty-led study tour to one of Europe’s most popular tourist destinations — southern Italy. The sponsoring organization for the tour was The Vergilian Society, Inc., a private foundation that promotes “the ties of culture between Italy and America.” Vergilian Society tours are open to everyone (with or without K College connections), but especially to those who have a life-long learning interest in the ancient civilizations of Greece and Rome.

The tour — The Archaeology of Identity in Coastal Campania: How Ancient Italians and Greeks Became Romans on the Bay of Naples occurred on July 30 to August 11. Anne Haeckl, Roman archaeologist in the Kalamazoo College Classics Department (who has excavated with K students in Italy and Egypt), and George Mason University’s Dr. Christopher Gregg, led the study tour of major Roman archaeological sites museums in Campania and the Bay of Naples. A previous Italian tour directed by Profs. Haeckl and Gregg in 2010 was a great success, with five K College students and alumni among its 28 participants.