A seed—call it science-and-social-justice—has been germinating in the mind of Regina Stevens-Truss since December of 2009. In truth, Stevens-Truss (the Kurt D. Kaufman Associate Professor of Chemistry) has been thinking on that matter long before then. But the occasion of that December seven years ago—a faculty workshop sponsored by the Arcus Center for Social Justice Leadership (ACSJL) on the topic of incorporating social justice into the undergraduate curriculum—and a conversation at the event with Harvard University professor Jonathan Beckwith (well known for uniting social justice and science in his science courses) gave Stevens-Truss a language for her thinking.

That small seed has come to fruition in several ways over the years, most recently (in a very big way) with the April 2016 Science and Social Justice Think Tank (SSJTT), which gathered from across the country some 60 experts and advocates for social justice consideration in the conduct of research and science education.

According to Stevens-Truss, in recent years scientists and science educators have improved in the area of science and ethics. Both groups have become better at considering and carefully answering questions like: am I doing research (or teaching research protocols) in a way that respects the human rights of research subjects as well as the integrity of the scientific process? Comparatively, science has been less effective in its consideration of social justice matters.

“We must become better at framing and answering social justice questions,” says Steven-Truss. Is the research we are considering good for society? Who will benefit? Will different communities benefit disproportionately? Will there be adverse burdens to bear and, if so, who or what communities are most likely to bear those burdens? 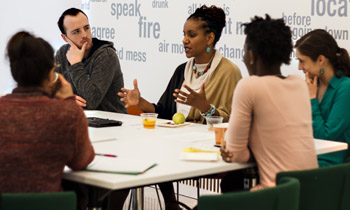 A similar battery of social justice questions for science educators certainly includes this one: What course content is required to ensure that students from various backgrounds see themselves as stakeholders in science to a degree that is sufficient to keep them involved in the discipline?

That last question inspired at least one living ancestor of April’s SSJTT. In 2011 Stevens-Truss, Beckwith and Lisa Brock, academic director of ACSJL and associate professor of history, began collecting the syllabi of science courses that integrate social justice. Two K undergraduate students and a Harvard graduate student searched colleges and universities across the country and compiled the various ways science professors fit social justice into the academic content of their courses. The trio made these ideas available as a resource to all on science and social justice website, part of ACSJL’s Praxis project.

“We wanted to gather professors, scholars, scientists, public health and environmental leaders working where science and social justice intersect,” says Brock. “We also sought experts on diversity in the STEM fields and people thinking about changes underway in society and science.”

SSJTT participants engaged with three questions: What benefits will accrue when social justice is included in undergraduate, graduate and medical school science courses? What are specific strategies for integrating social justice issues into scientific research? What disciplinary and institution reforms will most effectively advance social-justice-in-science nationally?

“We need to train the next generation in a way that these questions are second nature,” says Stevens-Truss. Particularly gratifying for her was the liberal arts diversity of the SSJTT’s presenters and participants. Attendees included researchers, science professors, policy makers, lawyers, journalists, writers and philanthropists.

“Our evening keynote speakers were a writer [and English professor Debra Marquart, “Owning Our Future: A Poet’s Response to Extraction”] and a visual artist [Mary Beth Heffernan, “Ebola, Culture and Social Justice Through the Lens of a Photographer”],” says Stevens-Truss.

Such diversity matters a great deal, she added, because social justice connects to art, poetry, the social sciences and the hard sciences, a fact with “deep implications for how we teach and practice science.” The committee is currently tackling how to extend the SSJTT’s momentum. The Praxis Center will help. And the language, platform and reach of the ACSJL will be critical.

Stevens-Truss has long been an activist, albeit (perhaps) without the sobriquet. Her work on campus with Sukuma, locally with Sisters in Science, and nationally in a program that connects practicing scientists and middle school teachers comprise distinct expressions of her preoccupation with matters of social justice and science. And now, through the Praxis Center and programs like the SSJTT, the cause and (yes!) its activists have a growing magnitude and unity.

“As scientists and educators we must help each other see our impact on people,” says Stevens-Truss, “and on communities. Especially the marginalized people and communities who often are the most adversely affected by our choices in boardrooms, laboratories, classrooms and scientific funding committees.”