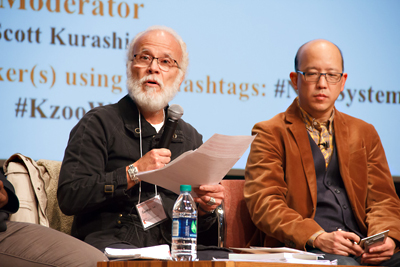 The tension between what is politically possible under the world’s current political and economic systems and what is ecologically necessary exposes an urgent need for change, said journalist and activist Naomi Klein, keynote speaker for the conference, “Without Borders, Post-Oppression Imaginaries and Decolonized Futures.” The conference was sponsored by the Arcus Center for Social Justice Leadership at Kalamazoo College and attracted several hundred activists and social justice experts from across the country.

According to Klein, even though the recent Paris climate change agreement looked like the beginning of the end of the fossil fuel era, the treaty is neither legally binding nor sufficient in its goals to avert ecological disaster.

“Fossil fuel frontiers have to be closed if we have any hope of a future,” said Klein. “Politicians have absolutely no plan to do this.”

Adequately addressing climate change has failed since the late 1980s, emasculated by a neoliberalist interpretation of capitalism that promotes privatization, fiscal austerity, deregulation, free trade and reductions in government spending to enhance the public sector. Such policies have created in people a profound sense of hopelessness about climate change, said Klein.

“We are told that selfishness and short-sightedness is part of human nature, which prevents us acting,” said Klein. “This is not true and it steers us away from an analysis of our system. In fact, the fight for survival is human nature.”

Many local, grassroots groups are advocating steps to address climate change because they see the issue’s connection to an unjust economic system that is failing for a vast majority of people all over the planet, she added.

Klein challenged the audience to work for “climate justice” by reversing the “extractivist” point of view of the Earth and promoting the “caretaking” of one another, an ethos that indigenous people advocate.

“It’s not just ‘energy democracy’ but ‘energy justice’ that we need,” said Klein. “This leads to clean energy projects and jobs.”

She also emphasized that service work like nursing, child care, public interest media should be redefined as climate work that sets out to create a “caring and repairing economy.”

“We need to embed justice in every aspect of our lives,” said Klein. “The people are hungry for transformational change, and we have to go for it on all fronts.”