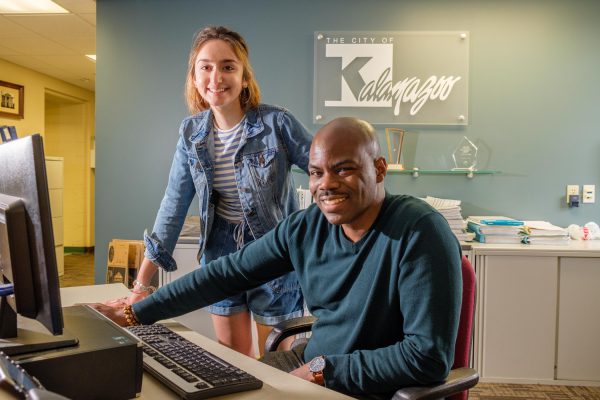 Sharmeen Chauhdry ’20 has gained experience conducting research for programs such as Shared Prosperity Kalamazoo, an antipoverty initiative coordinated by Kevin Ford. Chauhdry, seen here with Ford at the city planning office, will continue her experiential education with a summer internship through the College’s Mary Jane Underwood Stryker Center for Civic Engagement.

Though having students work with the city is not a new idea, it’s getting fresh attention because of a strategic confluence. The K Board of Trustees has adopted a new strategic plan for the College that calls for strengthening the K-Plan in part by finding more effective ways to link classroom learning to real-world experiences. And the city, with tens of millions of dollars in philanthropic support, is implementing its own strategic vision, Imagine Kalamazoo, with new initiatives such as Shared Prosperity Kalamazoo that provide just those sorts of opportunities.

“It just a win-win all around,” says Laura Lam ’99, Kalamazoo’s assistant city manager in charge of Imagine Kalamazoo, who credits an early K-city learning partnership for launching her career.

Alison Geist, director of K’s Mary Jane Underwood Stryker Center for Civic Engagement (CCE), says the new partnership is far larger than anything that preceded it. A model for how it will work is Cunningham’s winter term 2018 Social Research for Social Change class. Students not only read and discussed how to do research, they joined Shared Prosperity Kalamazoo to conduct it, interviewing residents about their needs.

The student-researchers, advised by Cunningham and Ford, focused on the means low-income residents have devised on their own for dealing with barriers to employment, such as costly child care and limited public transportation. Among those strategies: pooling resources to look after one another’s children during working hours and creating a sort of informal Uber to ensure jobs are accessible even when bus routes aren’t.

As the culmination of their classwork, the students wrote a report and recommendations documenting those solutions and the residents’ suggestions for how to make them more effective and broadly available. Shared Prosperity Kalamazoo is using the data in partnership with community members to devise new initiatives.

The city is in a position to carry out this work because of a burst of philanthropy intended to narrow the gap between what has been described as Kalamazoo’s two divergent cultures—one characterized by an uncommon cultural and educational resources, and the other plagued by persistent poverty and inequity. Underpinning the initiative, William D. Johnston, husband of former K Trustee Ronda Stryker, and William Parfet, brother of K Trustee Donald Parfet, joined forces to donate $70.3 million, creating the City of Kalamazoo Foundation for Excellence.

The city’s growing need for data to carry out its ambitious plans, and the College’s push to provide students opportunities to apply their learning, are coming together at just the right time, says Geist. She says the CCE is dedicating nearly half of its upcoming internships to Kalamazoo city programs, working with City Planner Christina Anderson ‘98.

“This is such an amazing opportunity,” Geist says. “It’s a real city with real city assets. It faces so many of the challenges faced by Rust Belt cities elsewhere but it has so many resources to address those issues.”

One of Cunningham’s students in the winter term research class, Sharmeen Chauhdry ’20, says being part of Shared Prosperity Kalamazoo brought home lessons about how ground-level community research can pave the way for meaningful change.

“We got to see what the real experts, the people in these situations, say about what works and what doesn’t, and what they need,” she says.

The anthropology-sociology major says she now sees government as a potential career choice, and will continue her work with the city this summer in one of the CCE internships.

Even for those who don’t choose such a career path, the benefits of experiential learning with the city government can have a lifelong effect, Geist says.

“It creates opportunities for our students so they can learn what it means to be a citizen,” she says.