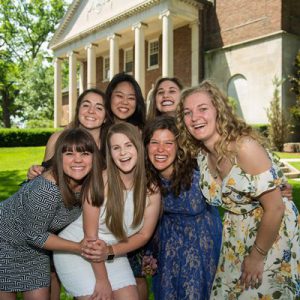 Congratulations to the following Kalamazoo College students, who received awards during the Senior Awards Ceremony on June 10, 2017, in Stetson Chapel. The awards include all academic divisions, prestigious scholarships, and special non-departmental awards. Again, congratulations to all graduates and members of the Class of 2017.

THE LILIA CHEN AWARD IN ART, awarded to students in their junior or senior year who distinguish themselves through their work in ceramics, sculpture, or painting, and who exhibit strong progress in their understanding of art.
Kelan Gill
Madeline Clair Lawson
Kelsi Levine
Giovanni Lo Grasso
Helena Maija Marnauzs
Harrison Thomas Parkes
Christa Scheck
Jie Xu

THE MARGARET UPTON PRIZE IN MUSIC, awarded each year to a student designated by the Music Department Faculty as having made significant achievement in music.
Thaddeus Martin Buttrey

THE RUTH SCOTT CHENERY AWARD, given to a graduating senior who has excelled academically in theatre and who plans to continue the study of theatre arts following graduation.
Thaddeus Martin Buttrey
Monica Johnson
Kyle Lampar
Sarah Levett
Lindsay Worthington

THE COOPER AWARD IN FINE ARTS, for a junior or senior showing excellence in a piece of creative work in a theatre arts class: film, acting, design, stagecraft, puppetry, speech.
Madison Louise Donoho

THE IRMGARD KOWATZKI THEATRE AWARD, awarded to the senior who has excelled both in academic areas and in theatrical productions during the four years at the College.
Sarah Levett

THE SHERWOOD PRIZE IN FINE ARTS, given for the best oral presentation in a speech-oriented class.
Quincy Isaiah Crosby

THE CHARLES TULLY DESIGN AWARD, given annually to a senior who has achieved excellence in some aspect of theatre design.
Lindsay Worthington

THE CHINESE OUTSTANDING ACHIEVEMENT AWARD recognizes seniors who have excelled in the study of the Chinese language and China-related subjects on campus and abroad in China.
Dejah Crystal
Marlon Gonzalez
Amanda Johnson
Natalie A. Schmitt
Katherine Wynne

THE CLARA H. BUCKLEY PRIZE FOR EXCELLENCE IN LATIN, awarded to an outstanding student of the language of the Romans.
Brittany Jones

THE PROVOST’S PRIZE IN CLASSICS, awarded to that student who writes the best essay on a classical subject.
Danielle Marie Gin
Brittany Jones

THE ALLIANCE FRANCAISE PRIZE IN FRENCH, awarded for excellence in French by an advanced student.
Maribel Blas-Rangel
Elijah Wickline

THE SENIOR SPANISH AWARD, given by the Department of Romance Languages for outstanding achievement in Spanish.
Cory Gyulveszi
Caroline Elena Sulich

THE DAVID STRAUSS PRIZE IN AMERICAN STUDIES, awarded for the best paper written by a graduating senior in his or her junior or senior year in any field of American Studies.
Jessica Paige Hansen

THE ELWOOD H. AND ELIZABETH H. SCHNEIDER PRIZE, awarded for outstanding and creative work in English done by a student who is not an English major.
Danielle Marie Gin

THE DEPARTMENT OF PHILOSOPHY PRIZE, awarded for excellence in any year’s work in philosophy.
James Michael Reuter

THE HODGE PRIZE IN PHILOSOPHY, awarded to that member of the graduating class who has the highest standing in the field.
Jon R. Jerow
Caroline Marie Peterson

THE H. LEWIS BATTS PRIZE, awarded to the senior who has done the most to support the activities of the Biology Department and to further the spirit of collegiality among students and faculty in the Department.
Suma J. Alzouhayli

THE DIEBOLD SCHOLAR AWARD, given to one or more seniors in recognition of excellence in the oral or poster presentation of the SIP at the Diebold Symposium.
Lucy Merrill
Theresa Marie Shuryan
Sarah Caroline Smith
Cameron Werner
Katherine Wynne

THE ROBERT BZDYL PRIZE IN MARINE BIOLOGY, awarded to one or more students with demonstrated interest and ability in marine biology or related fields.
Na Young Kim

THE WILLIAM E. PRAEGER PRIZE, established by the faculty in the Biology Department and awarded to the most outstanding senior major in Biology, based on academic achievement in the discipline.
Kathleen George
Katherine Wynne

THE ANNUAL UNDERGRADUATE AWARD IN INORGANIC CHEMISTRY, sponsored by the American Chemical Society Division of Inorganic Chemistry, to an undergraduate student planning on pursuing graduate studies in chemistry.
Sonam Shrestha

THE ANNUAL UNDERGRADUATE AWARD IN ORGANIC CHEMISTRY, sponsored by the American Chemical Society and subcommittee for the Division of Organic Chemistry, to an undergraduate student who displays significant aptitude for a career in organic chemistry.
Rachel Elizabeth Fadler

THE ANNUAL UNDERGRADUATE AWARD IN PHYSICAL CHEMISTRY, sponsored by the American Chemical Society and subcommittee for the Division of Physical Chemistry, to an undergraduate student who displays significant aptitude for a career in organic chemistry.
Eric S. Thornburg

THE OUTSTANDING CHEMISTRY STUDENT FROM KALAMAZOO COLLEGE, sponsored by the Kalamazoo Section of the American Chemical Society and is given to the graduating senior who has demonstrated leadership in the chemistry department and plans to pursue graduate studies in chemistry.
Sarah Glass

THE LEMUEL F. SMITH AWARD, given to a student majoring in chemistry pursuing the American Chemical Society approved curriculum and having at the end of the junior year the highest average standing in courses taken in chemistry, physics,and mathematics.
Collin Joseph Steen

THE CLARKE BENEDICT WILLIAMS PRIZE, awarded to that member of the graduating class who has the best record in mathematics and the allied sciences.
Jill Denise Antonishen
Yicong Guo

THE JOHN WESLEY HORNBECK PRIZE, awarded to a senior with the highest achievement for the year’s work in advanced physics toward a major.
Jill Denise Antonishen
Michelle Sugimoto

THE GEORGE ACKER AWARD awarded annually to a male athlete who in his participation gave all, never quit, with good spirit supported others unselfishly, and whose example was inspirational.
Andrew Marten Bremer

THE HORNET ATHLETIC ASSOCIATION AWARD, for a graduating senior who has most successfully combined high scholarship with athletic prowess.
Brent Yelton

THE MARY LONG BURCH AWARD, for a senior woman who has manifested interest in sports activities and excelled in scholarship.
Grace Fitzgerald Smith

THE KNOECHEL FAMILY AWARD, awarded to a senior male and a senior female member of the swim teams in recognition of demonstrated excellence in both intercollegiate swimming and academic performance.
Stuart Murch
Colleen Elizabeth Orwin

THE TISH LOVELESS AWARD, given by the Department of Physical Education to the outstanding senior female athlete.
Colleen Elizabeth Orwin

THE CATHERINE A. SMITH PRIZE IN WOMEN’S ATHLETICS, awarded to a woman athlete who in her participation gave all, never quit, with good spirit supported others unselfishly, and whose example was inspirational.
Suzanne Miller
Grace Fitzgerald Smith

THE RAYMOND L. HIGHTOWER AWARD, given to a graduating senior for excellence in and commitment to the disciplines of sociology and anthropology and leadership in the Department of Anthropology and Sociology.
Emily Levy
Chenxi “Abby” Lu
Yaneli Soriano Santiago

THE PROVOST PRIZE IN BUSINESS AND ECONOMICS, awarded to a senior for excellence in academic work in a business major.
Eric Castle De Witt
Philip Ritchie
Aidan M. Tank

THE MARSHALL HALLOCK BRENNER PRIZE awarded to an outstanding student for excellence in the field of psychology.
Kyle Hernández

THE CATHERINE A. SMITH PRIZE IN HUMAN RIGHTS, awarded to a senior who has been active on campus in promoting human rights, furthering progressive social and cultural change, and combating violence, repression, and bigotry.
Danielle Purkey

THE LUCINDA HINSDALE STONE PRIZE, awarded to a student whose scholarship, research or creative work in women’s studies, in the form of a SIP or other academic work, is most impressive.
Audrey J. Negro

THE GORDON BEAUMONT MEMORIAL AWARD, awarded to the deserving student who displays qualities of selflessness, humanitarian concern, and willingness to help others, as exemplified in the life of Gordon Beaumont.
Sarah Jayne Bragg
Mireya Guzmán-Ortíz

THE HENRY AND INEZ BROWN AWARD is awarded in recognition of outstanding participation in the College community.
Sidney Katherine Wall

THE VIRGINIA HINKELMAN MEMORIAL AWARD is awarded to a deserving student who displays a deep concern for the well-being of children, as demonstrated through career goals in the field of child welfare.
Moises Hernandez

THE BABETTE TRADER CAMPUS CITIZENSHIP AND LEADERSHIP AWARD, awarded to that member of the graduating class, who has most successfully combined campus citizenship and leadership with scholarship.
Grace Fitzgerald Smith
Yaneli Soriano Santiago

The Mary Jane Underwood Stryker Center for Civic Engagement recognizes the VIBBERT SCHOLARS, students who honor and exemplify the life and spirit of Stephanie Vibbert–scholar, activist, poet, feminist and artist–by leading programs that promote equity and justice through the arts and feminist organizing.
Emily Kowey