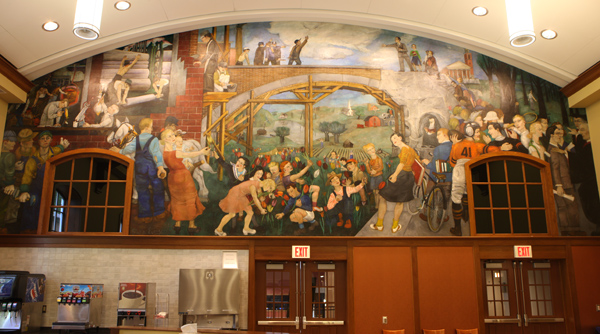 Associate Professor of Art History Christine Hahn published an article, “Maintaining Problematic Art: A Case Study of Philip Evergood’s The Bridge of Life (1942) at Kalamazoo College.” The article was published in Public Art Dialogue (6:1, 116-130) on May 27, 2016.

The piece is particularly interesting for any alumni familiar with the mural (see above) in Old Welles Hall. It covers the history of controversy inspired by the work since it’s unveiling (1942), including specific calls (in 1966 and in 2010) for some redress for iconography deemed offensive to and by some individuals and groups. Detailing the call-and-response to the criticism voiced in 2010, Christina ultimately suggests “that problematic public art has the unique potential to produce positive social change by staying in place.”

The article reveals much about K’s history, including Evergood’s time on campus as an artist and a teacher as well as his bona fides as an ardent social radical. Christina also introduces (from Lewis Hyde, author of Common as Air) a concept of “freedom of listening.” In his book Hyde cites Benjamin Franklin’s creation of a lecture hall where “people were free to give lectures on whatever they wanted.” In that space (Christina quotes Hyde): “Individual speakers present singular views; individual listeners entertain plurality….The hall was thus built to serve the eighteenth-century idea of replacing the partial self with a plural or public self, one who is host to many voices, even those otherwise at odds with the singular being you thought you were when you first walked in the door….If we take free listening to be the true end of free speech, then freedom itself takes on a different aspect…intelligence arises in the common world, where many voices can be heard; it belongs to collectivity, not privacy, and is available especially to those who can master the difficult art of plural listening.”

Christina invokes Hyde’s notion of “agonistic listening amongst equals in conflict” (a notion that is at the heart of the academy and a direct contrast to “antagonism, where opponents try to silence or destroy the other”) to describe College and student responses to the controversy implicit and explicit in the work, particularly the responses that took place or were considered between 2010 and 2015. She writes: “The building Benjamin Franklin built that embraced such agonistic pluralism eventually became the Philadelphia Academy, which in turn became the University of Pennsylvania. This transformation of space, built to house agonistic conflict among equals, is a particularly fitting symbol of how physical space can potentially create a space for inquiry, conflict and debate. This type of site is necessary and important. Indeed, as Lewis Hyde argues, it is agonistic spaces such as these that are the foundations of democracy.”

The presence of the mural, Christina continues, has provided the intellectual and emotive space for agonistic listening, “has allowed these twenty-first-century conversations on race, class dynamics and elite educations to take place….[M]aintaining problematic public art in an agonistic space helps keep our understanding of the past and our vision of the future firmly in view.” A fascinating article, well worth the time to read it.