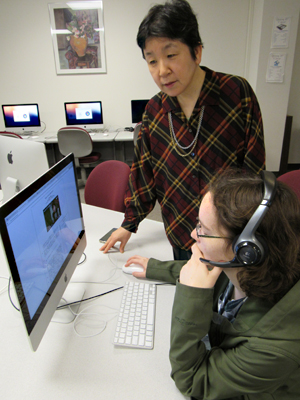 Noriko Sugimori (left) and senior Christa Scheck, who is majoring in studio art and earning a minor in Japanese

Assistant Professor of Japanese Noriko Sugimori will use a three-year grant from the Andrew W. Mellon Foundation to contribute her research to the Oral History in the Liberal Arts (OHLA), a project of the Great Lakes Colleges Association (GLCA). In a collaboration that also involves the Japanese department at Albion College, Sugimori and her K students are producing the world’s first bilingual (Japanese and English) synchronizations of interviews Sugimori conducted that focus on the World War II memories of various Japanese individuals.

The origins of those interviews trace back to Sugimori’s doctoral work. She researched the relationship between imperial honorifics and the concept of lèse-majesté (the crime of violating the dignity of a reigning sovereign or state) in Japan prior and during World War II. For that work she talked with several score of Japanese civilians born before 1932. The interviews were powerful, and the people with whom she spoke often deeply wanted to share their stories.

After completing her doctorate Sugimori began an oral history project that focused on war memories. Audiotaping was the cutting edge technology when Sugimori first starting interviewing subjects. Later she adopted digital videotaping. And in 2010 she became aware of Oral History Metadata Synchronizer technology, which provides a platform to show simultaneous English translation of video recordings in Japanese.

“That changed everything,” said Sugimori. “I am videotaping people who were teenagers during the war who are giving untold accounts of their experiences. These tapes can convey a whole different message to future generations about the war, and this is considered a unique contribution to the linguistics field.”

The videos and simultaneous translations have pedagogical implications for K students of Japanese. “They get to see the interviewee’s facial expressions,” said Sugimori, “which provide much more information about what is being said in a cultural context. This goes way beyond trying to learn the language from only grammar exercises.”

Because simultaneous translation allows for a more flesh-and-blood and nuanced entry into a recorded interview, students gain a more comprehensive understanding of history. “Students learn much more than political history,” said Sugimori. “They also see, as well as hear, how people were affected by the political actors.”

Today, digital technologies are making oral histories very popular among the general public. Sugimori and K students are among the pioneers helping to make that happen.

Text and photo by Olga Bonfiglio