Testifying to the enduring value of the K-Plan, renowned former U.S. District Judge Gerald Rosen ’73 told Kalamazoo College students in a campus visit that “it made me who I am.” 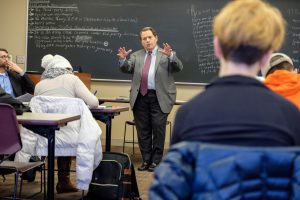 Students were invited to meet retired Chief U.S. District Judge Gerald Rosen ’73 on Monday, Feb. 19, and hear him talk about how his K experience helped him forge an exemplary career in public service and law. That career included engineering the “Grand Bargain,” which brought Detroit out of bankruptcy and paved the way for Motown’s rebirth.

“I’m a real product of the K-Plan,” said the recently retired judge, who presided over the Detroit-based U.S. Eastern District of Michigan and handled cases that included the city’s 2013 bankruptcy, the largest of its kind in U.S. history.

He came to the College to play tennis, he said, and had a vague idea about becoming a doctor. However, a familiar nemesis of many a would-be medical student — “two words,” Rosen said. “Organic chemistry” — dissuaded him from pursuing that field. He said his academic adviser pushed him toward political science, often a path to law school, and the K-Plan did the rest.

In a question-and-answer session with a student audience in the Olmsted Room at Mandelle Hall, Rosen recalled as particularly influential a history course that introduced him to the “roller coaster” career of Winston Churchill, the late wartime British prime minister who remains one of his heroes. He also cited philosophy courses that taught him the finer points of reasoning and writing; the challenge of participating in experiential learning opportunities that included working in the office of then-Michigan Gov. William Milliken; and study abroad in Sweden.

“I spent as many (terms) off campus as I did on campus,” he said, adding that experiences such as being a student teacher in an inner-city Philadelphia school challenged him to develop his self-reliance and fostered in him a sense of independence.

“You become confident in your ability to reason through things on your own,” he said. “I think if I had gone to a school that had a traditional program and a cookie-cutter curriculum I probably would have come out of it a different person than I am today.”

During his day at K, Rosen also spoke to a philosophy of law class led by Max Cherem ’04, the Marlene Crandell Francis assistant professor of philosophy; met with faculty; visited with the men’s tennis team as he praised K’s program as fostering “true student athletes;” and dined with President Jorge G. Gonzalez and Suzie (Martin) Gonzalez ’83.

Now beginning a new career as a high-level mediator with Judicial Arbitration and Mediation Services, Rosen served as a judge on the U.S. District Court in Detroit from 1990 to 2017 and was chief judge from 2009 to 2015. He long provided internships in his chambers to K students and graduates and received the Kalamazoo College Alumni Association’s Distinguished Achievement Award in 2014.