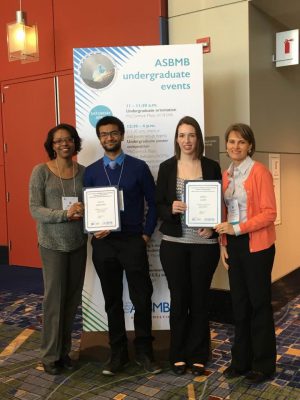 About 225 undergraduates from across the country participated in Experimental Biology’s poster competition in the categories of:

The event is a joint meeting of six different societies including the American Society for Biochemistry and Molecular Biology (ASBMB) as well as societies for physiology, nutrition, pharmacology, pathology and anatomy.

Glass said the meeting was a great opportunity to find out what’s going on in science and to practice presenting research. She is a chemistry major who will pursue a Ph.D. starting this fall at Vanderbilt University.

Glass presented research associated with her Senior Individualized Project (SIP). She investigated enzymes in the human liver that help process medicines, work that may become relevant in predicting how individuals will respond to their medications.

In contrast to Glass, it might seem strange that Wadhwa, a math major, not only participated but earned honors in an event largely attended by chemistry and biology majors. However, this project – which also was his SIP – united his interdisciplinary interests in computer science, math, biology and chemistry. 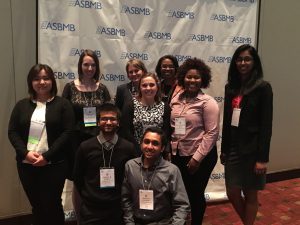 “Something like this could only happen at K,” he said, adding he owes a “thank you” to chemistry professors Regina Stevens-Truss and Laura Furge. Their guidance helped him inside and outside the lab, especially as they coached him in professionally presenting scientific research. “This would never have happened at a big university.”

Wadhwa described his research as still being a ways off from clinical application, although he was looking at a new class of potential drug therapies that in some ways are similar to antibiotics. He helped develop software used to predict the antibacterial potential of peptides being studied in Truss’s lab, work that could one day prove vital in this age of antibiotic resistance. Wadhwa will attend the Cleveland Clinic’s Lerner College of Medicine at Case Western University starting this fall.