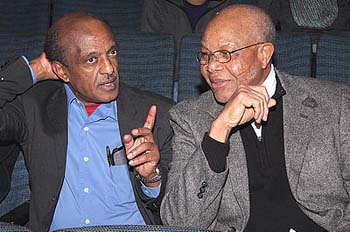 More than 500 social justice advocates, scholars and leaders ranging from civil rights icons and eccentric artists to young organizers and poet laureates will be on the Kalamazoo College campus, as well as locations throughout the city, this weekend, Sept. 25-28 to participate in the Arcus Center for Social Justice Leadership (ACSJL) “With/Out ¿Borders?” conference.

Attendees will engage in questioning–and openly attempt to complicate –the political, ideological, cultural, and social barriers that make up our world. Thought-provoking plenary sessions, participatory think tanks, and moving and entertaining artistic performances are just some of the diverse and engaging platforms that will be used to question the borders that surround so much of our world today–and develop paradigms and strategies to break them down.

Well-known performance artists and cultural workers Guillermo Gómez-Peña and Michèle Ceballos Michot, whom make up the performance troupe La Pocha Nostra, will be on stage on Friday afternoon with Adriana Garriga-López, the Arcus Social Justice Leadership Assistant Professor of Anthropology. The trio will discuss, instigate, and agitate on the meaning of border politics, performance, and the role of art in the process.

Later that day, the conference will take on a more poetic note, as two well-known poets read form their work and engage with local poet and activist Denise Miller and Lisa Brock, academic director of the ACSJL.

Nikki Finney, winner of the 2011 National Book Award for Poetry, and Keorapetse “Willie” Kgositsile, former poet laureate of South Africa, will bear witness to history and exile and set the stage alive with “truth telling” and love poems crafted out of the struggles of black people from both the southern areas of the United States and South Africa.

Participants in this plenary session will ask if the BDS movement is the next critical solidarity movement of our time, who it’s for, who it’s against, and why.

The future of various social justice movements will be on display in the Hicks Center Banquet Room Sunday morning, where a host of young social justice advocates and organizers will discuss their own projects, talk about the need for more youth to become involved and analyze the New Youth Movement.

For a full list of events, go to the conference’s schedule page.