Mattie Del Toro ’20 is a student worker for Residential Life, which has updated its suggestions for students regarding what to bring to campus this fall.

When Mattie Del Toro ’20 reflects on choosing Kalamazoo College, she remembers an experience brought to her by the letter K.

As a high school senior, Del Toro attended a Colleges That Change Lives fair near her hometown of Albuquerque, New Mexico, where a good friend had been looking into Knox College. Next to the Knox table, among the Ks and in alphabetical order, was Kalamazoo College.

“I remember thinking, ‘Is (Kalamazoo) the name of a city from a Dr. Seuss book? There’s no way that’s a real place,’ ” says Del Toro, a business and art history major and studio art minor. “I thought if anything it had to be a college named after someone rather than the name of a city.”

Her intrigue led her to approach Associate Director of Admission Andrew Grayson at the fair. Their conversation was fateful as Grayson’s assistance guided her toward an intercultural fly-in program. The program lets students from under-represented backgrounds who are interested in diversity and inclusion visit Kalamazoo College.

“I fell in love with the campus,” says Del Toro, who ended up enrolling at K. “I graduated with a high school class of 50, and when I saw how small and intimate the school is, I was sold. I received a great financial aid offer that made it about the same in terms of affordability as the University of New Mexico, and it was a chance to go across the country for the whole liberal arts experience.”

Del Toro is now a student worker for Residential Life, which has updated its suggestions regarding what to bring to campus for fall. Based on her experiences, as a first-year student living in Trowbridge Hall and as a resident assistant at Harmon Hall, here’s what Del Toro suggests.

Talk with Your Roommate About What to Bring to Campus

K students living on campus this fall should already have received their room assignment with their roommate’s name and kzoo.edu email address. Del Toro suggests contacting your roommate to arrange who will bring what, especially if at least one of you is coming from a considerable distance. 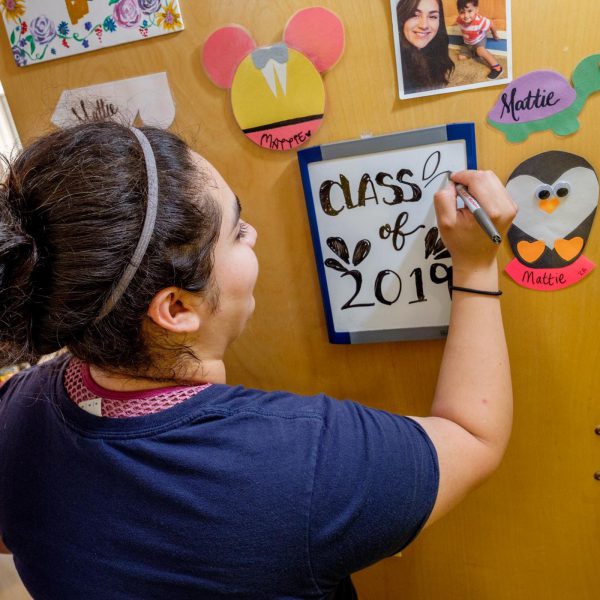 Mattie Del Toro ’20 advises that first-year students consider making their rooms as homey as possible in thinking about what to bring to campus. Items such as dry-erase boards can help students feel more at home.

Del Toro, for example, arrived in Kalamazoo for her first year by plane with her mom and then-boyfriend, now fiancé, bringing Del Toro’s belongings in a total of nine suitcases. Appliances, for example, weren’t an option for her.

“What you bring might depend on whether you’re from Michigan or someplace farther,” she said, adding that a roommate brought a microwave, curtains and mini-fridge, which she was happy to stock with food.

Shop for What You Can in Kalamazoo

Nine suitcases might not sound like much for transporting everything someone might need for an entire term. Del Toro, however, admits she packed too much and advises that less is more.

“When I left for fall, I packed stuff that I took home during winter break,” Del Toro said. Those items included several blankets and some heavy winter gear after she realized she only needed some long-sleeve shirts, jeans and jackets for the crisp weather that arrives late in the fall term.

When those items and other bulky items are necessary, shop for them in Kalamazoo or place online orders from your hometown and pick them up in Kalamazoo. Del Toro says to consider items such as mattress pads, shower caddies and “items that Mom would normally provide,” such as cleaning supplies and laundry detergent.

Residential Life doesn’t keep floor-plan measurements for specific rooms. Del Toro, however, advises that students look at pictures of residence hall rooms in K’s virtual tour to estimate their potential floor space. Those visuals should provide ideas as to where students can put items such as small cabinets and bins.

“You get a closet and drawers, but it’s beneficial to have bins and totes of your own as well,” Del Toro said. “I quickly realized I didn’t have the surface area I needed for certain items, and the virtual tour would’ve helped me plan better.”

Make Your Room Your Home

Del Toro says that on a residential campus such as K’s, it’s important that students make their residence hall room their home.

Items such as rugs, pictures of family and friends, twinkle lights suspended through adhesive hooks, and small pieces of furniture negotiated with roommates can ward off homesickness and make your room feel like an owned space.

“I didn’t want to get so comfortable in my space that I disrespected my roommate,” she said. “But any home goods can give you more than a brick wall, a desk and a bed,” allowing for greater comfort.