What buries food, stares at you, drags pizza across campus and runs across tree limbs in the Quad? They’re squirrels, and a group of Kalamazoo College students dedicates time to watching them. 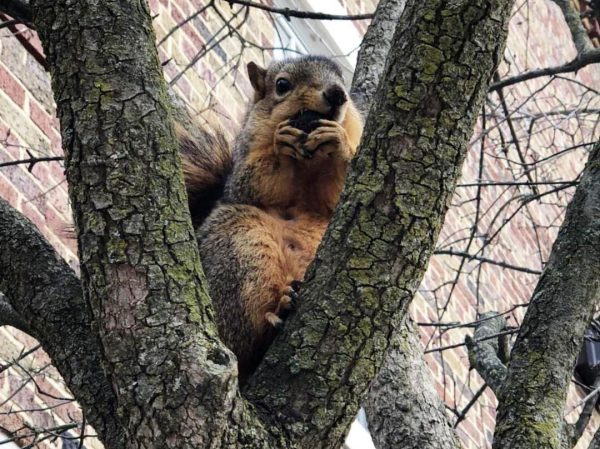 Squirrels draw a lot of attention from Kalamazoo College students, especially from those in the Squirrel-Watching Club. Marissa Castellana ’20 won the club’s photo contest in spring 2018 with this photo taken on campus.

“My housemates and I were interested in the squirrels around our house last year because it seemed like they were always doing something strange,” said Ryan Mulder ’20, a Spanish and business double major from Grand Rapids, Michigan. One of the squirrels even sounded like it was “barking” at him.

“I was so surprised because I never knew that squirrels made noises like that,” Mulder said.

That observation sparked the idea for an official student organization, the Squirrel-Watching Club.

“We knew there were similar clubs at other schools and it seemed like fun to start our own,” said Mulder, the organization’s president. “Squirrels are just so curious that it’s easy to find them doing something weird.”

About five to 10 students attend most meetings, employing binoculars and a 10-pound bag of squirrel feed to foster their observations. They also are active on social media and have conducted a squirrel photo contest.

“The most unique thing about the squirrels on K’s campus is that they’re somewhat used to the students and are more likely to interact with us,” Mulder said. “I think the most interesting encounters we have had with the squirrels on campus would not have taken place had they not grown up with so many people around.”

Mulder is among many club members on study abroad this term, so National Squirrel Appreciation Day on Jan. 21 will have to pass this year without any official club activities. However, Mulder will still mark the day.

“To celebrate National Squirrel Appreciation Day I think I will try and learn more about squirrels’ importance in the ecosystem in order to better appreciate them,” he said.

Meetings are expected to continue again soon thanks to the rascals that keep current students entertained and capture intrigue from incoming students.

“The squirrels at K are a fun distraction from schoolwork and just being outside to relax and watch them is great for the stress that can come with tough classes,” Mulder said.