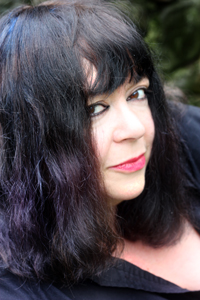 Writer in Residence Diane Seuss has published a poem, “backyard song,” in the February issue of Poetry Magazine. Di’s poem is part of a group of a recently devised poetic form known as the Golden Shovel, an homage to the poet Gwendolyn Brooks, who would be 100 years old this year. The last words of each line in a Golden Shovel poem are, in order, words from a line or lines taken often, but no invariably, from a Brooks poem.

Di’s poem is a riff on Brook’s “a song in the front yard.” Here’s a taste of Di’s Golden Shovel poem:

Uncorked, I had a thought: I
want the want
I dreamed of wanting once, a
quarter cup of sneak-peek
at what prowls in the back, at
what sings in the
wet rag space behind the garage, back

where the rabbits nest, where
I smell something soupish, sour and dank and it’s
filled with weeks like rough
cat tongues and
the wind is unfostered, untended,
now that it’s just me here and
I am so hungry
for the song that grows tall like a weed
grows, and grows.

But you should swallow it whole: page 452 in the February issue of Poetry. Di is one of several impressive poets in the Golden Shovel group, which includes the late Philip Levine, Sharon Olds, Rita Dove, Alberto Rios and Danez Smith, who read some of his poems on campus this past Monday at the Martin Luther King, Jr. convocation. Di’s most recent collection of poems, Four-Legged Girl, was a finalist for the Pulitzer Prize. Her next book, Still Life with Two Dead Peacocks and a Girl, will come out in 2018.