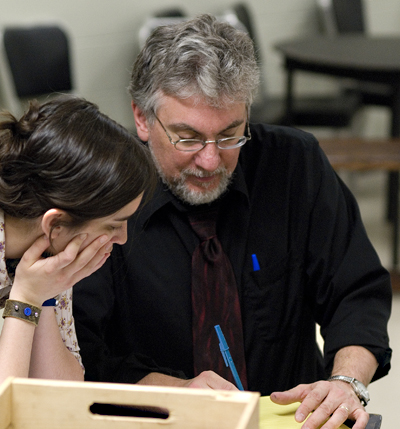 Festival Playhouse of Kalamazoo College will participate in the national Ghostlight Project on January 19, 2017. The event will unite more than 500 theatres, ensembles and companies, and high school and university theatre programs in a pledge to stand for and protect the values of inclusion, participation, and compassion for everyone–regardless of race, class, religion, country of origin, immigration status, (dis) ability, gender identity, or sexual orientation.

On that day before the U.S. presidential inauguration, “we invite the public to gather outside the Nelda K. Balch Playhouse no later than 5:25 p.m.,” said Ed Menta, the James A.B. Stone Professor of Theatre at K. “We will enter the theatre together and then turn on our lights (a cell phone or flashlight) in solidarity, tolerance and ritual connection to theatres cross the United States. We are especially proud that class of 1983 alumna Lisa Kron is one of the developers of the event at the national level.”

Festival Playhouse will participate with other members of Theatre Kalamazoo, the consortium of theaters in Kalamazoo County. According to Ed, the symbolism is inspired by the theatrical tradition of keeping illuminated a “ghost light” in a darkened theatre. “We create light for the challenging times ahead,” he said.

“Theatre is never apolitical,” he added. “And throughout history–from Greek tragedy to the WPA’s Federal Theatre Project to the Market Theatre in Johannesburg, South Africa–plays and performances have helped create conditions for political and social change.”

The Nelda K. Balch Playhouse is located on the campus of Kalamazoo College, on the corner of Academy and Thompson Streets, near the parking lot between the Light Fine Arts building and the Dow Science Center.