Already widely known on campus for their invaluable contributions to the community, 25 seniors have been honored with Kalamazoo College Senior Leadership Recognition Awards. They include talented athletes, outstanding students, dedicated resident assistants, members of the President’s Student Ambassadors and leaders of student organizations. In many cases, they fall into more than one of these categories. Senior leadership nominations came from faculty, coaches and staff throughout the College. 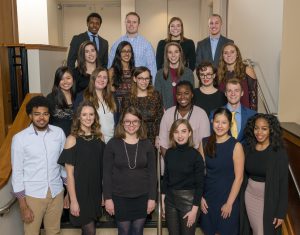 “Kalamazoo College students are, by definition, outstanding,” said President Jorge G. Gonzalez, who hosted the senior leadership awards dinner Friday for the honored students and their parents. “To be chosen for a Senior Leadership Recognition Award is to achieve a superlative distinction.”

Here are the senior leadership honorees and statements from their nominators:

Alexandrea Ambs (nominated for a senior leadership award by Jay Daniels ’13, swimming and diving coach)
“Lexi is a great teammate and leader … Almost everyone younger than her on the team were hosted by Lexi or she played a role in them choosing to swim at K … Always leads the team by positive example and has been committed.”

Hannah Berger (nominated by the Rev. Elizabeth Candido ’00, chaplain and director of Religious and Spiritual Life)
“I’ve watched Hannah grow and develop into someone who is articulate, confident and able to work across difference to bring about a great result. … She is an ego-less, diligent servant leader who moves the job forward.”

Mary Burnett (nominated by Ashley Knapp, Residential Life area coordinator)
“Mary has worn many hats as an RA, peer leader, orientation program assistant, Index writer and more. … She truly cares for her community invests in developing fellow students and creating a positive experience for all.”

Erin Butler (nominated by Sandy Dugal, associate director, Kalamazoo College Fund)
“Erin has been a president’s student ambassador since her sophomore year. … She has been actively involved in issues of student representation and student voice. …She strives to make K a richer community where everyone has a voice.”

Elan Dantus (nominated by Mark Riley ’82, men’s tennis coach)
“Elan is a co-captain of our tennis program and a two-time first-team All-MIAA selection. … Also a departmental student adviser and has earned many academic awards. … Kind, thoughtful and successful on and off the court.”

Leah Finelli (nominated by Knapp)
“Leah serves as a senior resident assistant and is an exemplary role model who has always been considered a go-to person. …There is no one I know better who lives their life in such a way that I believe exhibits enlightened leadership.”

Emily Good (nominated by Candido)
“Emily has been a dedicated participant and volunteer in Religious and Spiritual Life all four years and now is an intern. …I never hesitate to leave her in charge of a program, meeting or group. … Diligent, responsible and thorough.”

Andre Grayson (nominated by Amy MacMillan, L. Lee Stryker professor of business management)
“Andre is in the top 5 to 10 percent of students I have taught. … He stands out for internal drive, analytical skills and the ability to get people to see things from a different perspective. … He has an inner fire that drives him to go above and beyond.”

Griffin Hamel (nominated by MacMillan)
“Griffin has really stepped up as a leader in the classroom who takes initiative. …In any project he will work hard and dig in extensively to learn and share credit with those around him. … He remains positive even after tough feedback.”

Emily Kozal (nominated by Katie Miller, assistant athletic director and women’s basketball coach; and Dugal)
“Emily is a dedicated leader in the classroom, on the court, in the community and as a President’s Student Ambassador. … A force on the basketball team and in the MIAA. … Amazing role model, brings a tremendous work ethic.”

Laetitia Ndiaye (nominated by Brittany Lemke, Residential Life area coordinator)
“Laetitia has done wonderful work in the K community as a senior RA, as well as in Model UN, Latinx Student Organization and Kalama-Africa. … She is a fun, energetic, caring, inspiring and extremely kind person who takes great pride in her work.”

Skyler Norgaard (nominated by Riley)
“Skyler has been a responsible, independent and motivated person as he leads our team. … As a co-captain, he is positive, respectful and an excellent listener while also challenging his teammates with his thoughtful intellect.”

Alex Oswalt (nominated by Mark Murphy, women’s tennis head coach)
“Alex is one of the hardest workers I have ever coached. … Highly accomplished academically. … As a captain, she is a great communicator. … Upon graduation she will be sorely missed for her leadership, humility, kindness and heart.”

Sean Peterkin (nominated by Lemke)
“Sean is a senior RA and such a motivating, goal seeking and respectful individual. … He pays attention to detail, always has a smile and never stops trying his best. …Everyone around him, including me, learns so much from him.”

Sep’Tisha Riley (nominated by Geist, Denton, Hernandez, Kowey and Rieger)
“Sep’Tisha has demonstrated leadership, deep dedication and skill as she has worked to promote educational equity and youth empowerment … also a student worker for the Registrar’s Office and very active in the Theatre Department.”

Benjamin Rivera (nominated by Amy Newday, director, Writing Center)
“Ben serves as a mentor for my students and has inspired them with his work at the Lillian Anderson Arboretum. … He dedicates himself to following his passions, sharing those passions generously and quietly making a difference in his community.”

Rumsha Sajid (nominated by Marin Heinritz ’99, assistant professor of English and journalism; and Geist, Denton, Hernandez, Kowey and Rieger)
“Rumsha is one who has made an impact since day one and not only grown exponentially since then, but has also catalyzed the growth and education of everyone around her…passion for social justice and civic engagement.”

Sivhaun Sera (nominated by Dugal)
“Sivhaun is a president’s student ambassador and a ball of energy. … She is a founding member of the computer science leadership team and serves as a TA and a departmental student adviser. … She is mature beyond her years.”

Danielle Simon (nominated by Miller)
“Dani is one of the hardest-working people I’ve ever met. …This amazing work ethic allows her to succeed and have a positive impact in the classroom, on the basketball team and in the community. …She always strives for excellence.”

Elyse Tuennerman (nominated by Dugal)
“Elyse is warm, poised and authentic. … Her leadership is evident on campus and in the broader community. … Co-editor-in-chief of The Index, a tour guide for Admission, peer leader and active in the Student Funding Board.”

David Vanderkloot (nominated by Deia Sportel, academic office coordinator)
“David is dependable, efficient, responsible and has a great positive attitude. … He is well liked by his peers and highly respected by the faculty. … Serves as a Departmental Student Adviser and a valuable source of assistance for students.”

Kiavanne Williams (nominated by Aman Luthra, assistant professor of anthropology and sociology; and Knapp)
“Kiavanne was among the brightest and highest performing students in my class. … Very impressive SIP research that I have encouraged Kiavanne to publish. … An incredibly mindful and compassionate senior RA who cares deeply.”

Lia Williams (nominated by Dugal)
“Lia is highly involved as a presidential student ambassador and also as a career associate, psychology research and teaching assistant, and interfaith student leader. …Outstanding ability to relate to differing perspectives.”

Cindy Xiao (nominated by Lemke)
“Cindy is such an intelligent, dedicated, respectful and jovial individual. … As a senior RA, she is full of energy, has a positive disposition and is always willing to help. …Her drive and incredible talent are powerful forces to her success.”