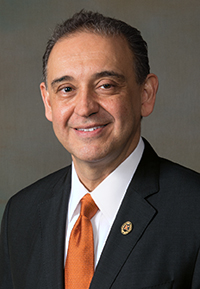 Jorge Gonzalez has served as President of Kalamazoo College since July 2016. Previously he served as Occidental College’s Vice President for Academic Affairs and Dean of the College from 2010 until 2016 and he was a member of the Trinity University faculty for 21 years (1989-2010).  Gonzalez served as chair of Trinity’s economics department for nine years and as special assistant to the president from 2008 to 2010.  At Trinity, he played an important role in the internationalization of the curriculum, the creation of faculty-led study abroad experiences, the development of an open access policy for faculty scholarship, and the implementation of new interdisciplinary initiatives. He served as an American Council on Education Fellow at Pomona College in 2007-08. At Occidental, he focused on providing strategic direction to the academic program, enhancing the academic policy structure, and working with external constituents to advance the goals of the College.

A graduate of the Monterrey Institute of Technology in Monterrey, Mexico, Gonzalez earned his master’s degree and Ph.D. in economics from Michigan State University. He has published extensively on such topics as foreign investment, undocumented immigration, international trade in the Americas, the Mexican financial system, and the political economy of U.S. trade and immigration legislation. A winner of Trinity’s top teaching award, he has taught courses in micro- and macroeconomics, international trade, economic development, and the economies of Mexico and Spain.

Gonzalez has presented his research findings at professional conferences in North, Central, and South America, Europe, Africa, and Asia. He is often invited to speak to companies, organizations, and community groups about the Mexican economy, and is frequently sought out for media interviews. He has been on the Board of the Flintridge Preparatory School (La Cañada, CA), KIPP Aspire Academy – San Antonio, the Asociación de Empresarios Mexicanos – San Antonio, the Greater San Antonio Chamber of Commerce, and the World Affairs Council of San Antonio.  He served as the President of the International Trade and Finance Association during 2014.  He is currently the President of the Board of the F.W. and Elsie L. Heyl Science Scholarship Fund and serves on the boards of the Annapolis Group, the Council of Independent Colleges, Bronson Healthcare Group, Kalamazoo Community Foundation and the W.E. Upjohn Institute for Employment Research.