Kalamazoo College Trustee Josephine “Jody” K. Olsen will be nominated to head the Peace Corps, the agency has announced. 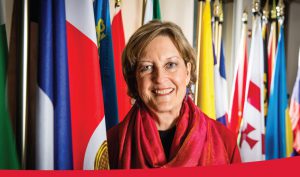 A K trustee since 2010, Olsen previously has served as acting director of the Peace Corps and was the agency’s deputy director for seven years. She is currently a visiting professor at the University of Maryland, Baltimore, School of Social Work. Her pending nomination by President Donald Trump is subject to confirmation by the Senate.

Kalamazoo College has a long relationship with the Peace Corps, ranking 13th among small schools on the agency’s 2017 list of Top Volunteer-Producing Colleges and Universities, and hundreds of the College’s alumni have served as volunteers since the Peace Corps was established in 1961.

As part of the confirmation process, Olsen will resign as a trustee. College President Jorge G. Gonzalez praised her service.

“Jody has been a great asset to our board and I am certain she will provide distinguished leadership for this crucial organization at a time when its work is more important than ever,” he said. “The Peace Corps has provided many Kalamazoo College graduates opportunities to make the world a better place while also helping them as they launch internationally focused careers.”

In addition to serving as acting director and deputy director of the Peace Corps, Olsen has been the agency’s chief of staff and regional director for North Africa, the Near East, Asia and the Pacific. She has also directed scholarly and international education organizations and is currently head of the University of the University of Maryland, Baltimore center for Global Education Initiatives, which provides experiential learning opportunities with international health organizations.