Speaking about his ambitions for the Kalamazoo Bach Festival, new Music Director Christopher Ludwa talks about what inspires him. 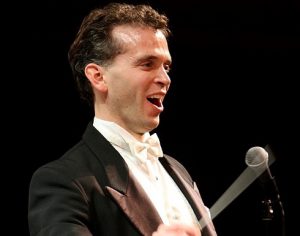 New Music Director Christopher Ludwa is acutely aware of the traditions that surround him as he becomes the festival’s first new director in 21 years.

Johann Sebastian Bach, the festival’s namesake? A reverence for the ancient traditions of choral music? The long history of the organization founded by Kalamazoo College Professor Henry Overly in 1946? All those things, of course. But also Steve Jobs, the late co-founder and CEO of Apple.

“Steve Jobs was brilliant at making you think you had to have his latest device,” Ludwa says. “My job is to make people feel like if they’re not going to a Bach Festival concert that they’re missing something really special.”

Sitting in his office at Light Fine Arts, where his desk shares space with a baby grand piano, Ludwa is acutely aware of the traditions that surround him as he becomes the festival’s first new director in 21 years. But as he steps into the role vacated by the retirement of K Professor Jim Turner, he says almost every tradition began with an innovation and that he hopes to establish some new ones for the community ensemble (whose numbers range from 70 to 90, depending on the performance venue and the repertoire’s needs).

The 2017 BachFest Christmas Concert on Dec. 3 in Stetson Chapel, the first major event for the chorus under Ludwa, will showcase his approach.

“Our name is Bach so we’re going to start with Bach’s ‘Magnificat,’ ” he says, referring to the master’s nearly 300-year-old composition based on the Virgin Mary’s song of praise in the Gospel of Luke. “But the second piece in the concert is going to be a Yoruba Christmas carol from Nigeria.”

The drum-driven syncopation of “Betelehemu,” the product of a collaboration between African-American music educator Wendell Whalum and Babatunde Olatunji, a Yoruba musician, contrasts with the Bach’s Baroque sonority. But Ludwa says the two pieces have much in common.

“Where I see the link is that you have completely different traditions in terms of schooling and background, and yet this common thread of the story, the story of this young mother having a birth experience that is, for her, life-changing and potentially, for humanity,” he says. “And so we show the audience the contrast between these two and we also bring them together and say, ‘Here’s the link.’ ”

Taking the chorus and its audiences on such musical explorations promises to be a Ludwa hallmark – a method he sees complementing Kalamazoo College’s multicultural approach to the liberal arts. He also speaks of enhancing the chorus’ technical mastery and educational value by establishing a structure in which K music students are mentored by the chorus’ five professional members and, in turn, mentor younger singers drawn from local high schools. “So you have this kind of layer cake of training,” he says, “that uses the talent of the professional section leaders we have to groom the students and that helps them develop their own leadership skills.”

What innovations does the future hold?

“One of the pieces that really blows my mind right now is ‘Hamilton’ ” Ludwa says, referring to the hip-hop musical that has taken Broadway by storm. “The relevance and brilliance of the way that text was set is on par with Cole Porter and Irving Berlin.”

“Obviously, it’ll be a long time before the Bach Festival does a medley of Hamilton pieces. However …”

BachFest Christmas! is scheduled for 4 p.m. Sunday, Dec. 3, 2017, at Kalamazoo College’s Stetson Chapel. The Bach Festival Chorus, directed by new Music Director Christopher Ludwa, will be joined by the Western Brass Quintet and the Portage Central High School Chamber Singers. Tickets are $18 to $29 at http://kalamazoobachfestival.tix.com, with $5 admission for students with school identification. For more information, call 269.337.7407.