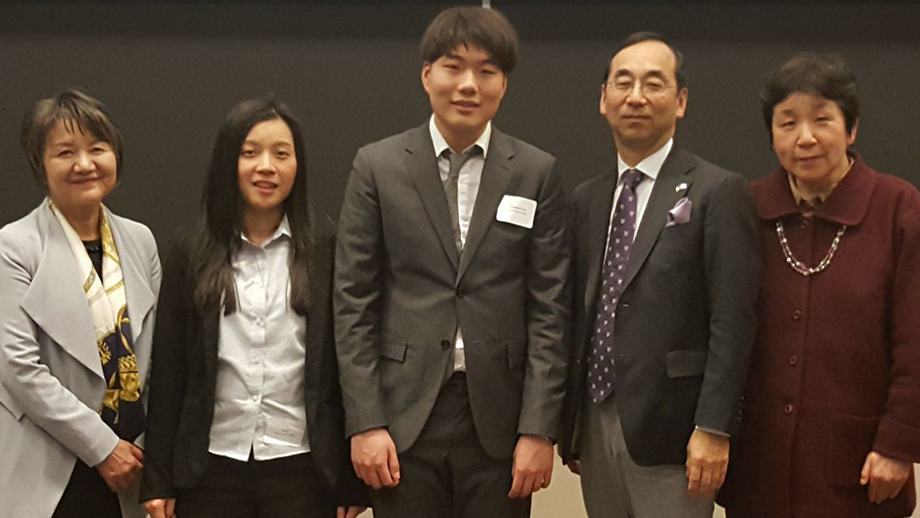 The heritages of sophomore YoungHoon (Richard) Kim and senior Jie Xu are rooted in Korea and China, respectively. Both students are also fluent in English. And both recently excelled in a competition featuring the language of fourth country–Japan. YoungHoon won the Consul General Special Prize in the annual Michigan Japanese Speech Contest, held at Wayne State University last week.  His speech was titled “I Don’t Like Him.”  In it, he expressed his ambivalent feelings about Japanese novelist Haruki Murakami, considered by many a potential winner of a Nobel Prize for literature. YoungHoon’s extensive knowledge of modern Japanese literature impressed the audience. Jie was a finalist in the speech contest. In her talk, “Preserving Traditional Chinese Art,” she discussed how a pottery class she took at K in her first year provided her an opportunity to rediscover the pottery and the tea ceremony that are part of her Chinese heritage. That renewal, in turn, led her to expand her interest, geographically, to include the pottery and language of Japan.  Also of note, Jie passed the Japanese Language Proficiency Test (JLPT) 2nd Level, a significant achievement for someone who has not participated in study abroad, according to assistant professor of Japanese Noriko Sugimori. K’s success in the speech contest was surely a team effort. Said Professor Sugimori: “We are particularly grateful to our Japanese teaching assistants—Yoji Hayashibe, Kaoru Ishida, and Reika Murakami—for their insightful feedback on the early drafts of YoungHoon and Jie’s speeches.” At K YoungHoon is majoring in East Asian studies and in philosophy; Jie is majoring in art. Pictured after the contest are (l-r): Ms. Takako Shibata, Japan Society of Detroit Women’s Club; Jie and YoungHoon; the Honorable Mr. Mitsuhiro Wada, Consul General of Japan in Detroit; and Professor Sugimori.