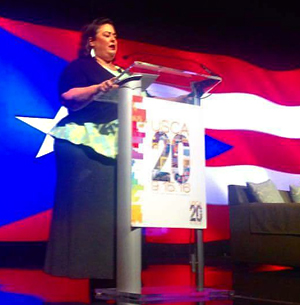 Adriana Garriga-Lopez, associate professor of anthropology, attended the 20th United States Conference on AIDS where she was interviewed by MD Magazine on the response to HIV/AIDS in Puerto Rico.

That response has long been the focus of her research. Specifically she studies the social ramifications of epidemics and how those ramifications influence the public health system in Puerto Rico. Although she finds much to criticize about the public health response to the HIV/AIDS epidemic on the island where she was born and raised until the age of 16, she is quick to note the debilitating influence on that response of the mitigating circumstance of the unjust power dynamic between the United States and its “unincorporated territory” of Puerto Rico.

Her work also studies the responses of the marginalized communities most affected by the epidemic, and there is much in those responses that have overcome the challenges presented by the inadequate public health response and, despite those challenges, been highly effective.

Garriga-Lopez’s interview was divided into four chapters: What is the Focus of Your Research?; Did Your Heritage Influence Your Decision to Pursue Anthropology? (which explores how colonialism manifests every day and an approach to decolonizing public health); What Challenges Do You Face? (which includes a focus on States, Bodies, and Epidemics [the title of a class Garriga-Lopez teaches at Kalamazoo College] and the fact that because social injustice affects everyone, everyone has a responsibility to understand and address it; for example, an effective response to the HIV/AIDS epidemic begins with understanding that it is in fact comprised of multiple epidemics; and What Are Your Thoughts on Some Researchers Considering Zika as the New STD?, in which Garriga-Lopez articulates the need to inextricably link public health and a social justice conscience. The former must go much further than emergency management and act on the complex issues of the latter, such as lack of access to basic rights and basic needs as well as an unbalanced power structure that denies democratic participation in distribution of resources to persons in greatest need of those resources.