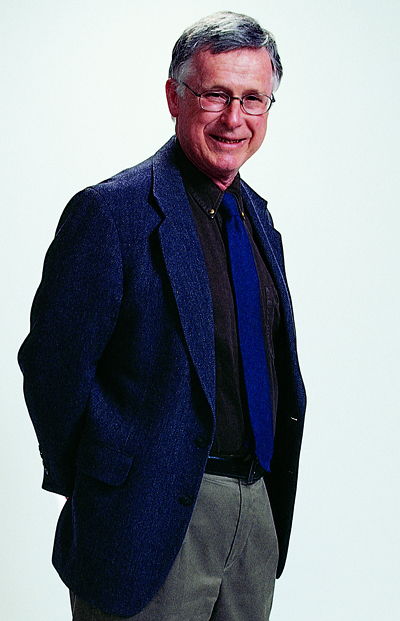 David Evans, professor emeritus of biology, died on September 20, 2016. He was 77 years old, four days shy of his 78th birthday, and doing one of the things he loved most—taking a walk on a trail. David’s 39-year career at Kalamazoo College began in 1965 and concluded with his retirement in 2004. “Biology is magnificent,” he once said, “and humbling, and goofy. In some sense, biology is best approached with a good eye for silliness, for it is stuffed with paradoxes, irony, and the ridiculous. This aspect of the subject is often the most engaging for non-majors, but it never fails to lead to more sophisticated material. I often used this movement from the ridiculous to the sublime as a teaching strategy in my courses.”

David’s area of specialty was insect behavior, and two important (and related) themes of his teaching and research were seasonality and adaptation. He earned his undergraduate degree in biology from Carleton College and his master’s degree and doctorate from the University of Wisconsin. His research was published in numerous journals, and he received many academic grants during his career.

His work took him to Africa many times. In 1982 he was a Fulbright professor of Biological Sciences at Njala University College at the University of Sierra Leone. In the early 1990s he visited the continent to study locust migrations on behalf of the United States Agency for International Development. His work and study in Africa became the basis for one of his K courses, “Ecology of Africa.” In 1995 he received the Frances Diebold Award for Contributions to the College Community, and in 1998 the faculty awarded him its highest teaching honor, the Florence J. Lucasse Lectureship for Excellence in Teaching. Those awards were related, in part, to the K marine ecology courses he co-taught with the late David Winch (professor emeritus of physics) on site at San Salvador Island and Jewfish Cay in the Caribbean. “On campus,” he said, “the class handled gray rubbery specimens preserved in jars. In San Salvador the students experienced the organisms alive and in color, and observed how they behaved in their habitat. It was like having one’s eyesight restored.”

Near and after his retirement he served during the summers as a naturalist at Fort Abercrombie State Park on Kodiak Island, Alaska. He loved that assignment, in part because of the “really cool truck” he drove, but mostly because of the liberal arts breadth of the work. In addition to naturalist, he worked as the island’s historian (delving into the area’s World War II days, in particular), and he wrote a weekly column for the island’s newspaper. Shortly after his final courses in a K classroom (spring term 2004) David served as “ship’s biology teacher” in a Semester-at-Sea program that circumnavigated the globe, with stops that included Japan, Hong Kong, Vietnam, Myanmar, Kenya, South Africa, Brazil and Cuba. And long into his retirement he often contacted the College with alerts regarding the achievements of his former students, both majors and non-majors.

David always loved the liberal arts, a passion closely related to his academic and research interest in adaptation. He believed that the liberal arts was the best educational model to develop a broader range of reference and a better sense of humor, traits he considered essential for adaptation in careers and life in general.

He died taking a walk, an activity he loved (particularly along an ocean shore) and that he wrote about in his August 29, 2001, column in the Kodiak Daily Mirror, his final column for that summer’s season.

“For me, the last tide pool walks mean that the park season is winding down….[T]idepooling is one of the most unpredictable park activities in which I’m involved. We seem to have a particularly good time when children are along…

“There’s an Alutiq saying that expresses tidal rhythms in terms of using plants and animals as food: When the tide goes out, the table is set; When the tide comes in, the dishes are washed. The saying gets to the same rhythmic renewal that makes me appreciate this kind of field activity so much. I know I can go down to an area where I’ve been dozens of times, and I can be guaranteed of seeing something new and wondrous.”