From the Chicago area to Kalamazoo, music lovers will have a chance to see a Kalamazoo College vocal group in two public concerts coming soon. 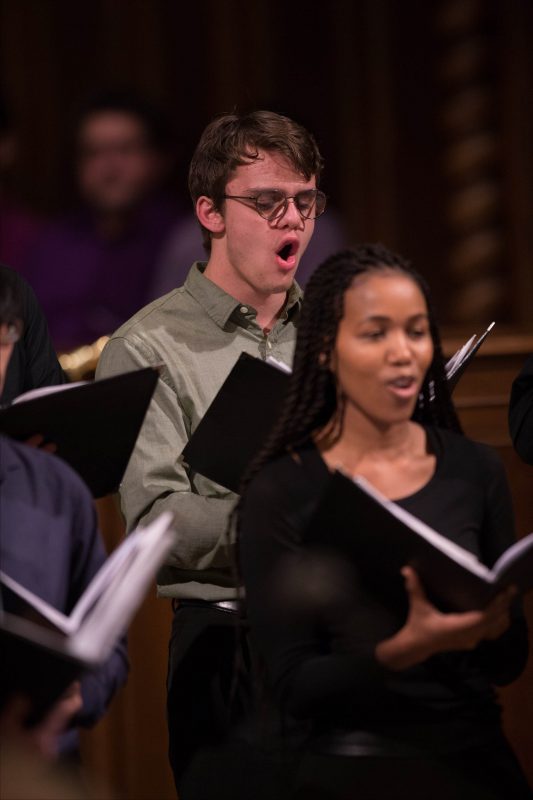 The College Singers have concerts coming up in Naperville, Illinois, on Oct. 25 and in Kalamazoo on Oct. 31.

The College Singers—a 28-voice mixed soprano, alto, tenor and bass choir representing music majors and non-music majors—will perform concerts titled Spark. The first is at 7:30 p.m. Friday, Oct. 25, at First Congregational United Church of Christ, 25 E. Benton Ave., in Naperville, Illinois. The concert is free and open to the public; donations will be accepted to defray the cost of touring for the choir. On Saturday, the group will perform a private concert at the Primo Center for Women and Children in Englewood for the residents receiving services from this non-profit.

The group returns to Kalamazoo to perform at 4:10 p.m. Thursday, Oct. 31, in the lobby of Dalton Theater at the Light Fine Arts building on campus. This concert is also free and open to the public. It is one hour long and should be long before trick or treating begins.

Spark is so-titled because it relates to pondering the origins of an idea through music and psychology.

“I was curious about the ways in which ideas come to life from nothing in particular,” said Assistant Music Professor Chris Ludwa, the group’s director, about crafting the performance. “That got me to thinking about the origins of various systems, even life itself, so the concert explores all of those things from the birth of people to the birth of ideas.”

The College Singers have performed in cities such as Detroit, Cleveland, Traverse City and Lansing before, leaving the Chicago area as a logical next destination for its first concert of the year—not only for its K connections with prospective students and alumni nearby, but the openness and welcoming nature of the public venues.

“It’s important that we move from the concert hall to the community,” Ludwa said. “Too often music has been something offered up in venues that exclude part of society.”

The director added the concerts will appeal to virtually any music lover.

“The song list will hit numerous genres from spirituals to chant,” Ludwa said. “We have old folk songs sung by trios and big, energetic songs that include drums, stomping and other forms of expression. If you have a pulse, you’ll find something that speaks to you on this program.”

Kalamazoo College, founded in Kalamazoo, Michigan, in 1833, is a nationally recognized liberal arts and sciences college and the creator of the K-Plan, which emphasizes rigorous scholarship, experiential learning, independent research, and international and intercultural engagement.

For more information on the concerts, please contact Ludwa at cludwa@kzoo.edu or 231.225.8877.