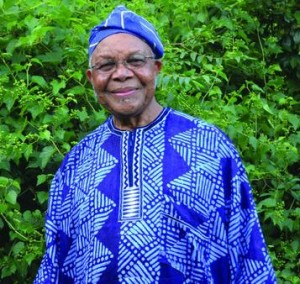 Within a 24-hour period, Kalamazoo College Scholar-in-Residence Olasope O. Oyelaran, Ph.D., will see his new book launch and his annual International Colloquium at the National Black Theatre Festival close for another year.

Oyelaran, husband of K President Eileen Wilson-Oyelaran, edited “Gem of the Ocean: Essays on August Wilson in the Black Diaspora” with Kwame S. Dawes. The book launched August 7 at Winston-Salem State University where Oyelaran taught in the Department of English and Foreign Languages from 1990 to 2005.

In 1993, Oyelaran founded the International Colloquium at the National Black Theatre Festival at Winston-Salem and remains its coordinator. The colloquium, which runs concurrently with the Festival, provides a forum for black-theater scholars and professionals from black cultures worldwide to examine real-life issues through the lens of theater. “Gem of the Ocean” documents much of the 2007 Colloquium, which paid tribute to August Wilson and to festival founder Larry Leon Hamlin, who died that year.

“August Wilson was all about access in the theater,” Oyelaran said in a recent Winston-Salem Journal article. “It is a coincidence that the book is coming out on Friday.”