Excitement is building across the country for first-year students who are anticipating their college experiences and planning what to bring to campus this fall. It’s a time Ximena Davis ’19 fondly remembers even though she attended college close to home after growing up in Kalamazoo. 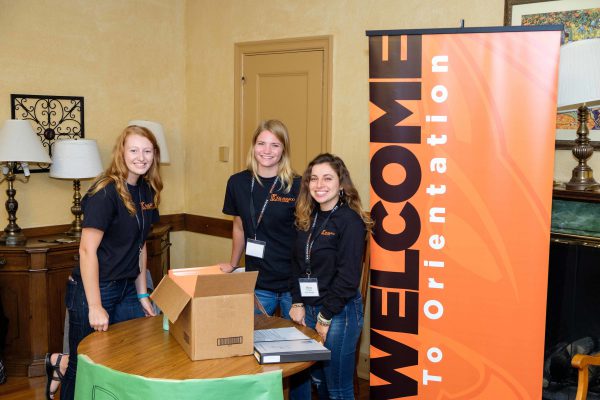 Student employees help first-year students with moving in to the residence halls. Read what one alumna offers for advice regarding what to bring to campus on move-in day.

“It was still a different place to stay and I was very excited,” Davis said. “I was ready to explore being an independent person. I also got to see a different side to the city than the one I saw while living at home.”

Davis’ experiences—beyond majoring in English, minoring in sociology and anthropology, and declaring concentrations in film and media studies and American studies—included regularly attending Art Hop, a fun evening of art exhibits and events in and around Kalamazoo; writing for K’s student blog and establishing the Kalamazoo College Filmmakers’ Society, one of more than 70 organizations available to students.

Residential Life has its suggestions regarding what to bring to campus this fall. However, it helps to get some perspective from someone like Davis who has lived in the residence halls while attending K. Based on her experiences, here are her suggestions after living in Hoben Hall, DeWaters Hall and a Living Learning House in her years at K.

Even if you’re arriving from several states away, it’s better to leave yourself more space than to overpack.

“It’s good to have pictures of friends, but you don’t want to be overwhelmed in your space,” Davis said. “I brought trinkets and keepsakes to occupy my desk space my first year. But throughout that year, I found it was too much. I was constantly getting stuff I wanted to decorate with, and I ended up packing away what I originally brought. I found myself wishing I would’ve given myself more of a blank slate by leaving more at home.”

Davis said that includes the cold-weather clothes she brought too soon.

“After moving in, I was going through my clothes and realized I brought five different jackets for various levels of warmth, along with my winter jacket and snow boots,” Davis said. “I must have thought, ‘What if it snows in October?’ as it has in many years. But even if it does snow early, it probably won’t be enough to justify boots.”

If it makes it easier to pack less, remember most items can be purchased in Kalamazoo stores and thrift shops after you take a visual assessment of your space. The shopping experience can also be beneficial.

“Because Kalamazoo College is located in a city, it’s not difficult to go to a store to find things you might need,” Davis said. “Even if you’re worried about not having a car on campus, there is public transportation, and carpooling is a good way to make friends. I think going with a roommate can be a bonding experience.”

Bring to campus simple tools and decorations that will enable you to better remember your first year at K. Davis, for example, decorated with strings of lights that used clips for attaching photos, and she kept an assignment notebook that doubled as a journal.

“I first had a couple of pictures from prom or an amusement park, but it helped to keep adding to it,” said Davis, regarding her string of lights. “I brought it every year and added to it every year.”

Within the journal, “I kept all of my thoughts in one place,” Davis said. “It was nice to have during that time of change and then look back on those memories. I think it helped me grow into a more confident person and helped me be better organized.”

Talk to your roommate in advance

Before Davis moved to campus, she feared the worst regarding her roommate.

“I knew Residential Life tries to match like-minded students, but I was worried they would make a mistake somewhere along the line and they would give me a roommate I wouldn’t get along with as well as they’d hoped,” Davis said.

Talking with that roommate in advance through social media, though, helped alleviate that fear. Plus, just as importantly, it helped the two determine who would bring what to campus.

“Communication is very important,” Davis said. “It helps you feel better about this new experience, and it will prevent you from doubling up on big items such as microwaves that can take a lot of space.”

Kalamazoo College’s new-student move-in day is scheduled for Sept. 10. If you have questions before, during or after that time, more information is available. Find Residential Life at its website or contact its offices at housing@kzoo.edu or 269.337.7210.