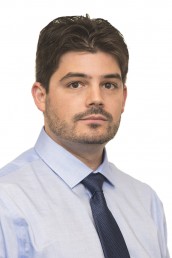 Justin Horowitz ’05 is a graduate research assistant in bioengineering at the University of Illinois at Chicago (UIC). He’s also the first author of a study that describes the development a of mathematical algorithm that can ascertain intention even when the act of carrying out that intention is interrupted.

The study article is titled “I Meant to Do That: Determining the Intentions of Action in the Face of Disturbances,” and it appears in the online journal PLOS ONE. The article’s co-author is James Patton, professor of bioengineering and principal investigator of the study, which occurred at the Rehabilitation Institute of Chicago and was supported by the National Institute of Neurological Disorders and Stroke.

Horowitz and Patton call the discovery a “psychic robot” and its potential applications may turn out to be profound. Imagine a car diverted from its course that could restore the driver’s intended direction faster than the driver could do so. ““The computer has extra sensors and processes information so much faster than I can react,” Horowitz said in a UIC press release (October 6, 2015, by Jeanne Galatzer-Levy). “If the car can tell where I mean to go, it can drive itself there. But it has to know which movements of the wheel represent my intention, and which are responses to an environment that’s already changed.” The algorithm can make that distinction.

The algorithm also may have potential application in treatment of stroke patients. Imagine a prosthetic device that can restore a patient’s intended course of action before that intent was changed by after-effects of the stroke, such as interruptions in motor coordination. “If you know how someone is moving and what the disturbance is, you can tell the underlying intent,” said Horowitz, “which means we could use this algorithm to design machines that could correct the course of a swerving car or help a stroke patient with spasticity.”

Horowitz earned his bachelor’s degree at K in biology.