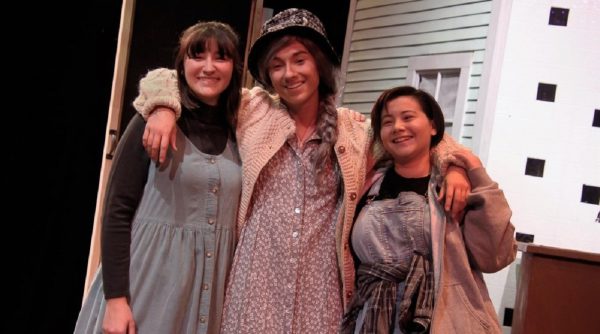 Rebecca Chan ’22 (right) will play Percy and serve as the dramaturg for the Festival Playhouse production of Spitfire Grill. Sedona Coleman ’23 (left) will play Shelby and Sophie Hill ’20 (middle) will play Hannah.

Can a former prison inmate one day be redeemed, have healthy relationships and feel free from the person who once attacked her? The fall Festival Playhouse production of the musical Spitfire Grill examines these issues for parolee Percy Talbott, who tries to forge a new place for herself in the small town of Gilead, Wisconsin. There, she combats town gossip—mostly about herself—in a place that represents freedom, far from where she was attacked.

Rebecca Chan ’22 will play the lead role and serve as the production’s dramaturg.

“When (Percy) was in prison, she found a picture of Wisconsin in a travel book,” Chan said. “It looked open and free, so she decided she wanted to go there when she was released.”

As the dramaturg, Chan is responsible for working with the director, Visiting Professor “C” Heaps, on background research and how current events and perspectives might inform or shape the production. That means in addition to performing a critical role, Chan is preparing a lobby display and writing an essay that will further discuss the play’s themes including female empowerment, domestic abuse, redemption and the mistreatment of veterans, especially Vietnam War veterans.

The theme of female empowerment is especially important to Chan, who feels honored to participate in the Playhouse’s 56th season, which recognizes women in theater under the theme “HERstory: Forgotten Female Figures.”

Chan notes that many storylines in theatre productions are male-dominated, even as a majority of those participating in college theatre settings are women. “It’s nice to do a show where a majority of the performers are women and they’re a big influence on the show,” Chan said.

Spitfire Grill has three main characters, all of whom are women. Shelby, played by Sedona Coleman ’23, is a woman in her 30s who struggles to find connections outside of her emotionally abusive husband. Hannah, played by Sophie Hill ’20, is an elderly woman and the owner of the grill. Hannah has a son, Eli, who left to fight in Vietnam and has never returned. Like Percy, both are characters trying to find their place in Gilead.

“The town falls apart because Eli had been a symbol of hope and the future,” Chan said. “Eli’s missing status is the catalyst for everything falling apart. The play’s progression starts in the winter, and the costuming and dialogue reflect the progression of seasons. That’s followed by rebirth and more life in people’s lives before it ends in fall with the colored leaves.”

By the end, the three female characters who once were isolated and lonely become strong friends.

“It’s almost like they build their own family,” Chan said.

The show is accompanied by a live, five-person orchestra, performing on a piano, a guitar, a mandolin, a violin, a cello player and a keyboard tuned to sound like an accordion. Their folk-like music, derived from Appalachia, reflects Percy’s background as a West Virginia native.

The performances are scheduled for 7:30 p.m. Thursday, Nov. 7, through Saturday, Nov. 9, with a 2 p.m. showing on Sunday, Nov. 10. Tickets for all four shows at the Nelda K. Balch Playhouse are available by visiting festivalplayhouse.ludus.com or by calling 269.337.7333. Adults are $15, seniors are $10 and students are $5 with an ID. Kalamazoo College students, faculty and staff are admitted free with their College IDs.