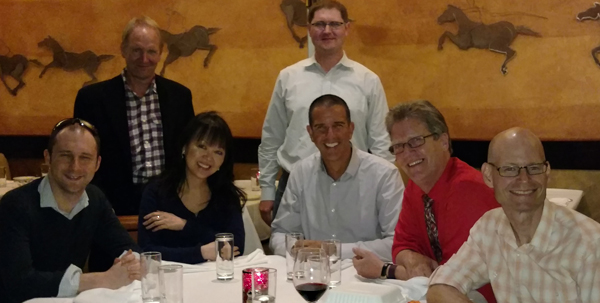 Professor of Psychology Siu-Lan Tan convened and co-chaired a symposium titled “Film, Television, and Music: Embodiment, Neurophysiology, Perception, and Cognition” on July 6, at the 14th International Conference for Music Cognition and Perception held at the Hyatt Regency in San Francisco. This conference gathers more than 550 music cognition researchers from around the world.

The panel presented theoretical and empirical work using diverse multimedia excerpts from Star Trek, Mission Impossible, Pirates of the Caribbean, Gladiator, and various television commercials for products such as Doritos, Apple iPhone, and Gaultier perfume. The photo shows the seven participants of the Film and Television Music symposium group at a planning session the night before the July 6 presentation, at the Palio d’Asti restaurant in San Francisco. Seated left to right are David Ireland, Siu-Lan, Juan Chattah, Scott Lipscomb, Mark Shevy. Standing are Roger Dumas and Peter Kupfer.

Siu-Lan is a a leading figure in the psychology of film music and the editor of The Psychology of Music in Multimedia. She has been involved in several recent projects that focus on the role and power of music in movies.