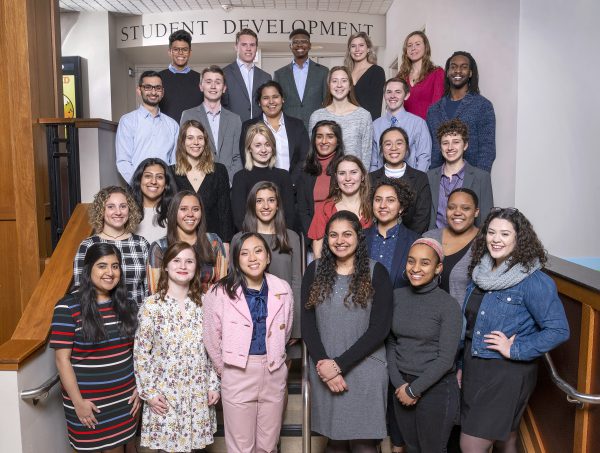 Thirty students known for their invaluable contributions to the Kalamazoo College community were honored Friday at the 16th annual Senior Leadership Recognition Awards.

The recipients represent talented athletes, outstanding academic performers, members of the President’s Student Ambassadors and student-organization standouts. Here are the honorees along with brief statements from their nominators:

“Kristen is consistently going above and beyond what is expected of her as a senior resident assistant, and has helped create a strong, loyal and supportive staff team.”

“Riya has done extraordinary work in Student Involvement as a Monte Carlo planning committee chair, marketing coordinator and co-chair of the Student Funding Board.”

“Madie is a department student adviser for Critical Ethnic Studies who has demonstrated vision, accountability to community and organization.”

“As Lakshya’s supervisor, I’ve been impressed by her initiative, organization and dedication. She is a valued member of our team and a strong leader who trains new students.”

“Iffat has demonstrated dedicated and compassionate leadership in many areas at K. She has been a senior resident assistant, a member of the President’s Student Ambassadors, a Posse scholar, a teaching assistant and president of the Minority Association of Pre-Med Students.”

“Paige is a valuable asset across campus. She leads with positivity, grace and drive to improve experiences for all.”

“Addie is a writing consultant, a department student adviser for American Studies, and a president’s student ambassador. She is a gifted writer who thrives on working with peers to help them create stronger skills.”

“Leslie is an exceptional student in the energy and dedication she brings to the classroom and her commitment to social justice. As a civic engagement scholar, she has had strong involvement with the county ID program since its inception.”

“Josh has demonstrated extraordinary leadership in the classroom and within the community for computer science students. He is creative and supportive with the willingness and skill in helping others in a completely collaborative way.”

“As a second-time senior resident assistant, I am constantly impressed by Mel’s inherent ability to go above and beyond. She is extremely reliable and has a people-centered, solution-oriented style, paired with incredible compassion and care.”

“Mya is a four-year varsity record-setting basketball player who has proven to be a force on our team. … As a vice president of the Kalamazoo College Council of Student Representatives, she is a confident and steady guide.”

“Alyssa is a two-year captain of the softball team. She exudes leadership qualities and characteristics. I trust her completely to handle anything. She is an active member of the Student Athletic Advisory Committee and Sisters in Science.”

“Daniel is a co-captain of the men’s tennis team, and a three-time MIAA First Team and MIAA All-Academic Team member. He brings his leadership skills to everything he does on and off the court.”

“Li Li is smart, kind, diligent and confident. She is an enthusiastic Student Development office assistant and natural born mentor as a peer leader.”

“Jilia is a three-time peer leader and a president’s student ambassador. She serves as an elementary school classroom assistant and the YWCA’s Restorative Justice public policy intern. She’s an extraordinarily caring and compassionate leader.”

“Rosella is a model student who has received departmental recognition. She is very active in student government. She is driven and motivated as a soccer player, but also selfless.”

“Madisyn helped start the Dow Council to foster a more inclusive and supportive environment for students who feel marginalized or discouraged in the sciences. She is a compassionate, attentive listener.”

“Anna is the quintessential ‘lead by example’ leader. She’s always doing the right thing at the right time.”

“Kevin is a gifted scientist and fast learner. He is capable, independent, curious, effective, kind and dedicated with a heart to serve others.”

“Elizabeth is one of the finest student-athletes I have had the opportunity to work with. She was named the inaugural MIAA Sportswoman of the Year. She’s a president’s student ambassador and serves the Kalamazoo County ID initiative.”

“Ravi is a leader who sees a need and finds the best possible solution for everyone involved.”

“Karina is the president of the Kalamazoo College Council of Student Representatives and works with great poise to hear all perspectives.”

“Orly is one of the most highly motivated students we’ve ever worked with. She has a passion for social and environmental justice and has inspired students, faculty and staff, creating lasting opportunities for future generations at K.”

“Yasi revitalized the Just Food Collective and helps infuse activism and advocacy with deep, thoughtful exploration of identities, communities and sovereignty. In Religious and Spiritual Life, she is a group builder and positive presence.”

“Simran does everything in her capacity to help her peers be successful. She is creative and thorough with a strong work ethic.”

“Matt has shown exemplary leadership on campus as a member of the soccer team, an academic mentor and a senior member of my research group. He is a fantastic student who embraces the liberal arts and encourages all those around him to succeed.”

“Madison is a resilient, team-first figure on the soccer team and a tremendous leader across campus. There is never a task that is too small for her to complete to benefit the team.”

“Adriana is an exceptional student and a great leader in collaborative projects. She is a Political Science department student adviser and teaching assistant. She revived the Pre-Law Society, taking the lead to coordinate valuable experiences and information for her peers.”

“Andrew is a 2020 senior class agent. With his infectious positivity and energy, he takes the lead to keep peers connected through strong communication and a feeling of purpose.”

“Donovan is a positive, charismatic leader who has made his mark in a wide variety of areas. He is involved in the President’s Student Ambassadors, a cappella, Young Men of Color, Peer Leaders and Theatre.”