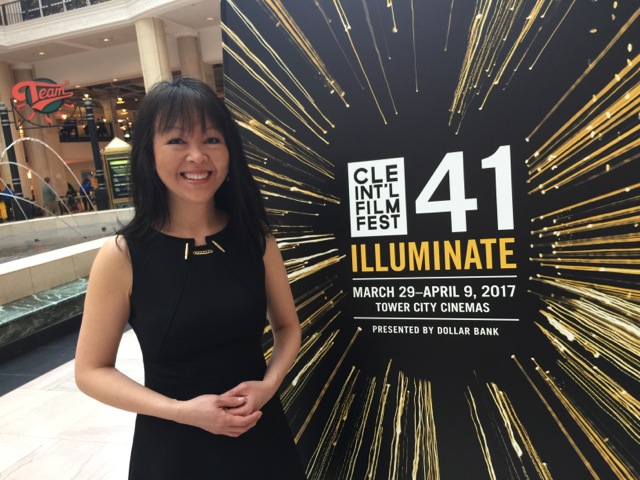 Professor of Psychology Siu-Lan Tan at Tower City theaters, where the film, SCORE, played for three days in five theaters as part of the Cleveland International Film Festival.

The very same expertise (teaching and music) that made the role of Siu-Lan Tan so prominent in the documentary SCORE also prohibited her from attending any of the more than 40 public screenings of the film–she was, after all, busy teaching classes. That changed in early April, when the professor of psychology at Kalamazoo College was finally able to see a festival screening of the film at the 41st Annual Cleveland International Film Festival (CIFF).

She picked a great screening, or screenings.

“The first screening at Cedar Lee Theater sold out,” says Siu-Lan. “On day two, they moved the film [full title: SCORE: A Film Music Documentary] to a theater complex at Tower City and the cinema sold out again.  So they opened a second theater, and that one filled too! On the last screening day, they filled two theaters for SCORE and had to turn more people away.”

“The director [Matt Schrader] asked if I could attend as a special guest from the cast, and I joined Q&A sessions at the first and third screenings. I also did 35-minute extended Q&A Chat Room by myself.”

And CIFF is no small event. This year more than 100,000 people attended. The festival featured the work of some 300 filmmakers and a total of 418 films from 71 countries. SCORE won in its category (Music Movies Competition) and was one of only 15 films recognized on closing night.

Why the great response? Because the best movie you ever saw is the best, in part, because it’s the best movie you ever heard. Siu-Lan and some 60 other people interviewed for SCORE help explain the critical role of music scores to the emotional impact of a film. In addition to Siu-Lan, others interviewed include some of the top living film composers in United States and the United Kingdom (Hans Zimmer, Danny Elfman, Randy Newman,  Howard Shaw, Trent Reznor, Alexandre Desplat, among others), as well as film directors like James Cameron, producers like Quincy Jones and several film scholars.

An expert in the psychology of music (a course she teaches at K) Siu-Lan appears five times in the film. Kalamazoo College is mentioned every time Siu-Lan appears, and K is thanked in the end credits along with the filming location of Dalton Theater.

The popular film is on the docket for many upcoming festivals. You can also check upcoming screenings here. So if you get a chance, go see SCORE; it’s likely to be the best film you’ve ever heard, or at least reveal why your favorite movie has as much to do with your ears as your eyes.

Shakespeare was right when he had Lorenzo say (Merchant of Venice, Act 5, Scene 1) that it is music creeping in our ears that has the sweet power (like Orpheus) to change the very nature of reality and the way we perceive it. A film without its score is a body without its heart.

SCORE is scheduled for release in theaters in 20-25 major cities on June 16.