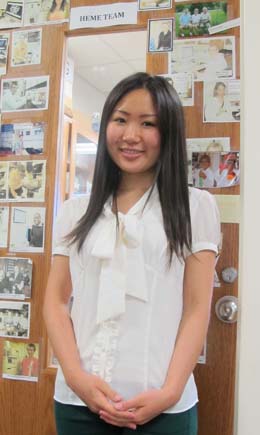 Because its name sounds like a vintage fighter plane, one might think the “Heme Team” that works with this enzyme is a group of pilots or aviation mechanics. But P450 (short for Cytochrome P450) refers to a family of enzymes that do vital work in the human body such as clearance and transformation of pharmaceutical drugs in the liver. And the “Heme Team” (named for heme, an iron-containing chemical component in all members of the P450 family) are four student research assistants working this summer in the chemistry lab of Professor Laura Furge. The team includes Rina Fujiwara ’15 (pictured at left), Amanda Bolles ’14, Mara Livezey ’13, and Parker De Waal ’13.

According to Fujiwara, Cytochrome P450 2D6—one member of the enzyme family—is responsible for the metabolism (think: conversion into a useful form) of some 20 percent of the medicines we take. So it’s definitely a P450 worthy of study—which, of course, means nature made it difficult to grow in a laboratory setting (as sure as the vegetables your mother said were good for you always tasted terrible). In fact, a great many P450 enzymes are intriguing, and the chemical modification of them and their mutations could one day have significant application in making medicines more effective.

Enter the Heme Team. Part of its summer work, says Fujiwara, has been to use recombinant bacteria (bacteria modified to include the DNA of P450 2D6) to grow the enzyme. Then team members try to separate the purified enzyme from the bacterial culture. Last year, they came close to achieving the goal. This year they developed a new protocol in which the bacteria cells (think: P450 factories) grow more slowly. Fujiwara is also doing work to obtain an even more difficult to express mutant version of 2D6, and that work might become the basis of her Senior Individualized Project next year.

On the threshold of her third year at K, the international student from Japan (chemistry major and thinking about a second major in biology) has always loved science, particularly the area of nutrition. This is her first year in the Furge lab, and she loves working with Dr. Furge and her fellow research assistants. “They are great mentors,” says Fujiwara, “and always help me with my many questions, no matter how elementary those questions may seem.” One exciting side effect of her work this summer, she adds, is the enthusiasm it has sparked for cell biology and biochemistry, two courses she is eager to take during her junior year.

Another great side effect is Dr. Furge’s expertise in another kind of chemistry—baking! “She makes delicious carrot cake and blueberry pies and brings them in for her research students,” says Fujiwara. “I love this lab!”