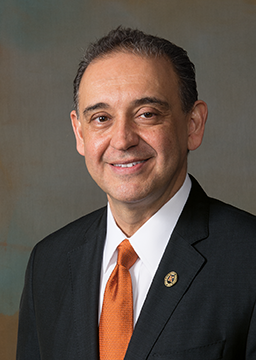 Kalamazoo, Mich. (January 12, 2016) – The Board of Trustees of Kalamazoo College has chosen Jorge G. Gonzalez, Ph.D., to become the institution’s 18th president. Gonzalez is currently vice president for academic affairs and dean of the college at Occidental College (Los Angeles, Calif.). He succeeds President Eileen B. Wilson-Oyelaran, Ph.D., who announced her retirement in April 2015. Her last day at K will be June 30. Gonzalez will begin his new duties as K’s president on July 1.

“I feel my life has been a preparation for this incredible opportunity to advance the liberal arts and the K-Plan,” he said. “Kalamazoo College’s mission is a perfect match with my deeply held belief in the learning values and the life values of experiential education and international education.”

Gonzalez said immersion in the liberal arts is the most powerful and life-enriching form of undergraduate education when students have opportunities to apply their academic work in a variety of extra-curricular experiences. As a professor and as an administrator—both at Trinity University, where he worked from 1989 to 2010, and at Occidental College—he has created innovative programs combining liberal arts academics and experiential applications that cross borders and cultures.

“The board’s vote was unanimous, and our excitement boundless,” said Board of Trustees Chair Charlotte Hall ’66, who led the presidential search committee. “Dr. Gonzalez is a passionate champion of the liberal arts and has an abiding commitment to the values embodied in the K-Plan: academic excellence, experiential learning, intercultural understanding and community engagement. Through all of his work, he has sought to make that powerful combination better and more accessible to diverse groups of students.”

Gonzalez won Trinity University’s most prestigious teaching award. He is widely published and a frequent contributor at professional and academic conferences. His research interests include international economics, political economy and development. He served as the president of the International Trade and Finance Association (2014), and he was selected by the American Council on Education for its prestigious ACE Fellowship (2007-2008). He spent that academic year at Pomona College and visited and spent time with the leaders of about 30 other colleges and universities across the country.

Gonzalez grew up in Monterrey, Mexico, and earned his Bachelor of Arts degree (major in economics) from the Monterrey Institute of Technology (ITESM). During his junior year he studied abroad at the University of Wisconsin-Eau Claire, an experience, he said, “that changed my life!” He earned his M.A. (economics, 1986) and Ph.D. (economics, 1989) from Michigan State University.

Gonzalez is married to Suzie (Martin) Gonzalez, a Kalamazoo College graduate of the class of 1983. They have two children, a daughter (Kristina) who recently graduated from the University of Southern California with a major in international relations and is now working in commercial real estate in Los Angeles, and a son (Carlos) who is a sophomore at Rice University majoring in computer science.

The appointment of Gonzalez is the culmination of a seven-month-long national search process. Along with Hall, the search committee included trustees Jim Clayton ’78, Gwen (Van Domelen) Fountain ’68, Si Johnson ’78, Alexander Lipsey ’72, Jody Olsen, and Jon Stryker ’82; Alexandra Altman ’97, president of the Alumni Association Executive Board (and a member of the board of trustees); faculty members Arthur Cole, associate professor of physics, Kyla Day Fletcher, assistant professor of psychology, and Jan Tobochnik, the Dow Distinguished Professor of Natural Sciences; Victor Garcia ’97, grounds coordinator for facilities management; Tanush Jagdish, member of the sophomore class; Stacy Nowicki, library director; and Sally Arent, assistant to the vice president and dean of students and secretary to the search committee. The search committee was assisted by the well-known higher education search firm, Storbeck/Pimentel.

Kalamazoo College (www.kzoo.edu) was founded in Kalamazoo, Mich., in 1833 and is one of the oldest colleges in the United States. Located midway between Chicago and Detroit, K is a nationally recognized liberal arts college and the creator of the K-Plan that emphasizes rigorous scholarship, experiential learning, leadership development, and international and intercultural engagement. Kalamazoo College does more in four years so students can do more in a lifetime.