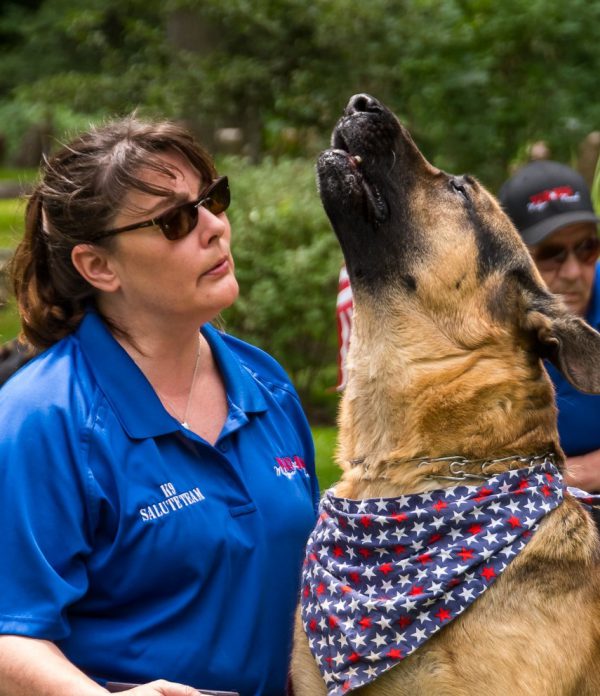 Until late June 2020, K9 Kaiser was one of 22 dogs on the Michigan War Dog Memorial K9 Salute Team. Suanne Martin ’84 will sculpt a statue in Kaiser’s likeness, representing all the Salute Team dogs that have passed including Kaiser. Kaiser is pictured with Julie Fentner, the dog’s handler.

The Michigan War Dog Memorial (MWDM) in South Lyon gives the canines that once served our country, troops, police and firefighters, along with therapy and service dogs, a proper sendoff. The memorial cemetery, first established in 1932 as a pet cemetery, was rediscovered and renamed in 2010 as the MWDM, and it has hosted services to honor the dogs since 2014.

The MWDM K9 Salute Team was at the memorial cemetery nearly every weekend from mid-May through October in 2019, honoring 17 fallen heroes with services that included missing-dog formations, a color guard, bagpipes, bugler, funeral flag, headstone and a personalized hand drawing of the deceased dog at no charge to the dog’s handler.

Until late June 2020, K9 Kaiser—an exceptionally large German shepherd, weighing 160 pounds—was one of 22 dogs on the MWDM K9 Salute Team. In ceremonies honoring dogs at the MWDM, Kaiser performed a howling salute, much like a 21-gun salute, that would resound and recognize the honoree being interred during a service.

“I am beyond honored to be chosen as the sculptor for this important memorial project,” Martin said.

When Martin first attended K, she aspired to be a painter, until an art professor, the late Marcia Wood ’55, encouraged her to take a sculpting class.

“I was intimidated, to be honest, but she pushed me out of my comfort zone,” Martin said. “Once I got my hands in clay, I never looked back.”

After graduating, Martin desired more training in anatomy to enhance her skills in sculpting life forms. She studied for three years at the Center for Creative Studies in Detroit before she earned her master’s degree at the Pratt Institute in New York.

That training led to sculpting characters and figures that were later cast and used for magazine illustrations or put into production in the toy industry. She was also contracted by a studio to be one of the people sculpting portraits of the U.S. Constitution signers for the National Constitution Center in Philadelphia. 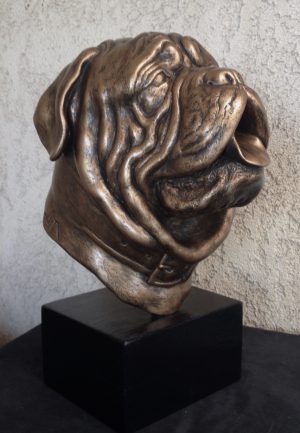 Later, as she owned dogs, they were natural subjects for new sculptures. First was a lean and muscular boxer; years later there was a French mastiff, which Martin described as a dream breed.

“Being in New York City, this huge, red, wrinkly puppy became a celebrity in his own right,” Martin said. “I made a lot of good friends through him.”

When her mastiff died unexpectedly after five and a half years, sculpting him was part of Martin’s grieving process. When she posted the end result on Facebook, friends and their acquaintances took notice. That garnered Martin attention on social media that allowed her to earn more commissions before connecting with Julie Fentner, who was Kaiser’s handler, and earning the job of sculpting Kaiser.

“It’s exciting,” Martin said. “This is the first outdoor monument sculpture that I’ve taken on all by myself. I’m not only creating the original artwork, but doing the molding and casting. This is not just me doing a piece to please one person. I want to honor all the canine officers, military dogs and service dogs under that whole umbrella. I want this to inspire a lot of people.”

The nonprofit Michigan War Dog Memorial so far has raised about $5,000 toward a $20,000 goal to fund Martin’s project. Those interested in making donations toward the sculpture are invited to do so through Facebook or GoFundMe. If all goes well, Martin hopes to start the project in October and finish it around mid-2021.

“For the last six and a half years, Kaiser has brought joy and happiness doing therapy with veterans, seniors, mentally challenged adults, fire departments, police departments, rehabilitation centers, a few human funerals and many other places, as do many of the other MWDM K9 Salute Team member dogs,” Fentner said. “His ability to bring happiness to others knew no bounds. I am so honored that my boy Kaiser is going to represent the MWDM K9 Salute Team dogs and be memorialized himself.”