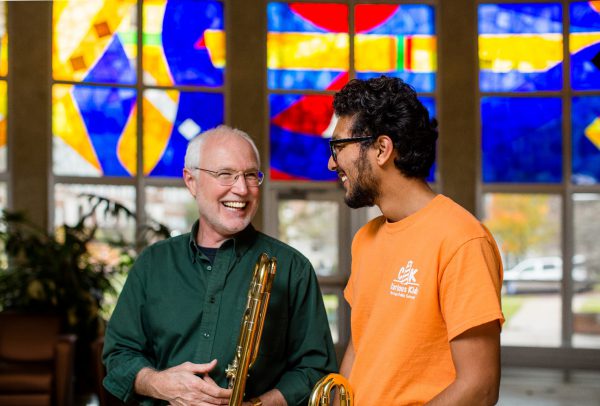 There are days during the year when it makes sense for Kalamazoo College to toot its own horn. International Jazz Day is one of them, as the College’s Jazz Band is known for its well-attended, quality performances popular with the musicians themselves and audiences alike.

According to its website, International Jazz Day — celebrated each April 30 — unites communities, schools, artists, historians, academics and enthusiasts to celebrate jazz and its roots. It helps the world learn of jazz’s future and its impact, while encouraging intercultural dialogue and international cooperation.

That desire to celebrate jazz could cause anyone, from jazz novices to experts, to gravitate to K’s Jazz Band.

“We tell our audiences, ‘if the music affects you, get up and dance,’” said Music Professor Tom Evans, the band’s director, who ensures his group is deserving of recognition around K and around the Kalamazoo community. “By the end, we usually have many who are dancing in the aisles. It’s always great to play in front of such an appreciative audience.”

The enthusiasm of the musicians is part of what makes the band special. “I have one rule with the Jazz Band: It’s OK to make mistakes, but it’s not OK to play without passion,” Evans said. “I believe (the band) can make you a better person. It makes you more disciplined and it engages your mind. It’s a chance to explore history from the earliest jazz continuing through many contemporary artists.”

For those who need a primer in jazz as they mark International Jazz Day, Evans said the music is exciting because “jazz reinvents itself every night. If you go to a concert and see the same group two nights in a row, the beginning and the end might sound familiar, but the middle would be different.”

That middle represents the jazz process of improvisation, defined as the spontaneous creation of fresh, original melodies beyond the notes on a page. Improvisation is inspired by the musicians performing and how they feel at a given moment. Plus, they can never be identically repeated.

K’s Jazz Band typically follows standard big band instrumentation with five saxophones, four trumpets, four trombones and a rhythm section consisting of a pianist, a bass player, a guitarist and drummers. This year’s rhythm section features two guitarists and adds a vibraphone player. A vibraphone has metallic bars instead of the wooden ones seen on the garden-variety xylophone.

“A xylophone has a distinctive wooden ‘dong’ sound, but a vibraphone has metal with sustained pitches that sound like ‘ting,’” Evans said. Those pitches are controlled through fans underneath the instrument that spin and rotate.

For students interested in Jazz Band, there are music ensemble scholarship opportunities for incoming students, and while auditions are sometimes required for the band, there are more opportunities to participate and take a leadership role than you might find at a larger school.

“If you attend somewhere like the University of Michigan, good luck. You’re probably waiting until at least your junior year to play in the Jazz Band, and even then, there might be a waiting list,” Evans said. “K is a place where students have immediate leadership opportunities from the moment they get to campus.” Jazz Band is no exception. “With the Jazz Band, every voice is critical. If one person doesn’t show up, it affects everyone.”

Evans came to K in 1995, inheriting the College’s Jazz and Symphonic bands, after teaching at Alfred University, another liberal arts institution, in Alfred, New York. His jazz bands have toured Chicago, Washington, D.C., Cincinnati and Detroit in the U.S., and Russia, Estonia, Japan, Finland and Tunisia around the world.

The group’s next concert is scheduled for 8 p.m. Saturday, May 11, in the Dalton Theater at Light Fine Arts. Evans said the band’s play list will include some early jazz, swing, bop, fusion, funk and Latin varieties.

“At the end of each concert, I want the kids to walk off the stage as heroes,” Evans said.

Hear some selections of prior Jazz Band performances and learn more about the group at its website.