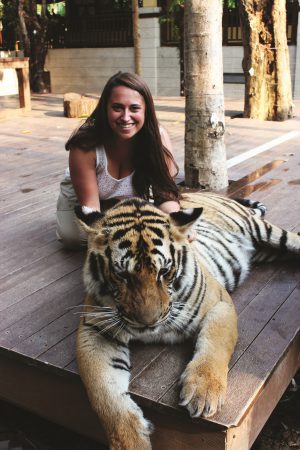 “Foreign study at K cultivates confidence and an open mind,” said Jennifer Zeoli, a Kalamazoo College graduate who studied abroad during her junior year in Strasbourg, France. Today, her foreign study continues in places such as Thailand.

Jennifer Zeoli’s foreign study has never stopped. Fortunately, she has a great job for travel and the perfect avocation (photography) to freeze and savor its moments.

After the psychology major (Kalamazoo College Class of 1996) graduated, she returned home (Clinton Township, Mich.) and took a temporary job through Kelly Services. She was assigned a two-week gig at Tweddle, a publishing company that quite likely produced the owner’s manual in your car. Well, for Zeoli, “temporary” turned to 20 years that, through work or play, have included 45 countries and 300 cities.

Quotidian and un-sexy as automobile owner manuals may seem, there are cars all over the world, making manuals a very cosmopolitan product. As Tweddle’s account manager for Ford Europe and Ford Asia Pacific, Zeoli has worked in many countries, including a three-and-a-half year posting in Turin, Italy. Last December she was in Melbourne, Australia, and February found her in India. Whenever she’s on the road, she takes every opportunity to wander and see the sights.

“I like my job,” said Zeoli. “Evolving technologies make it interesting. I also love traveling for the company and on my own.”

Travel means diving into different languages and cultures and meeting different people, with many of whom she continues to correspond.

“Foreign study at K cultivates confidence and an open mind,” said Zeoli, who studied abroad during her junior year in Strasbourg, France. “K helped prepare me for work in other countries.”

Work abroad has provided other, less material, value. “Travel allows you to see how other people live, which can deepen your awareness and appreciation of your own home.” (For all her travels, Zeoli still calls home the town where she grew up.) “When I was in Cambodia, I saw long lines of people with sick children waiting to see a doctor. In Tanzania I saw kids wearing shoes made from motorcycle tires. Travel has changed my perspective on what’s important in life.” 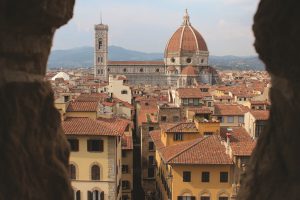 Jennifer Zeoli travels to places such as Florence, Italy, today after foreign study at K took her to Strasbourg, France.

Her wanderings extend beyond work. She’s seen (and photographed) wonders: the star-filled night sky outside her Bedouin tent in the Sahara desert, the muted gray beauty of beach ice in Iceland (see back cover), the grace and presence (both overwhelming and tenuous) of the animals—lions, elephants, giraffes and wildebeests— she saw during a safari in the Serengeti.

Zeoli has a knack of aligning the places she visits with her own life’s moments, like timing her 40th birthday celebration on Easter Island. One year in Europe, she celebrated Halloween by going to Transylvania and visiting the castle of Vlad the Impaler.

In addition to her business travel, Zeoli has joined group tours and traveled alone. In 2012, she soloed in Jordan and Turkey and never had any problems. “I always show respect for people and don’t take any unnecessary chances. I’ve been OK and expect that will continue.” 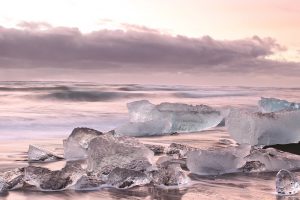 Jennifer Zeoli travels to places such as Iceland today after foreign study at K took her to Strasbourg, France.

In true liberal arts fashion, Zeoli preps for her trips by studying the history of a place. Before she saw the cathedral in Florence she studied how construction commenced in 1294 without a plan for building the dome. Builders put up the walls, and the town held a contest that sought ideas on how to build the dome.

“Once you know a few things about a place, you gain another layer of appreciation for it,” said Zeoli.

She definitely appreciates Tuscany and hopes to one day own a villa there. “My love of Tuscany grew when I worked in Italy. I spoke broken Italian but managed pretty well with my 50 Italian co-workers. They became my teachers and were patient and kind to me.”

Zeoli studied French at K to go along with her foreign study and relied on it when she spoke Italian.

“If I didn’t know a word in Italian, I’d use the French word and add a vowel at the end. You’d be surprised how often it worked,” she said. The company also gave her a week-long language class in Florence.“I did pretty well,” she said, “but the teacher did comment that I spoke Italian with a French accent.”

Zeoli’s position provides four weeks of vacation which (no surprise) she devotes to travel.

“I use the wallpaper on my computer for the next place I will visit,” she said. Next on her agenda is Hawaii.

“One of the items on my bucket list is to ride in a helicopter over the big island,” said Zeoli. “It will make for fantastic photos, and I can’t wait!”

Her photography has morphed from avocation to art. Zeoli is quite accomplished at recording the beautiful and intriguing places she has visited. She uses a Canon 70D camera, which has full manual settings. It’s definitely not your point-and-shoot style camera, and it produces fabulous effects.

She takes her camera with her everywhere and loves to photograph landscapes, cityscapes, animals and flowers — or anything she finds interesting or unique. She is intent on capturing the moment.

“When you stand in front of the pyramids you’re a part of them,” she said. “When I am home and look at the photos on my wall, I think about how they represent different moments of my life.”

Of those 45 countries and 300 cities, what’s her favorite?  “Florence. I love its history, its connection to cultural giants like Dante, Machievelli, Michangelo and DaVinci, its compactness and, of course, its fabulous food.

“I don’t usually go back to a lot of places, but I go back to Florence as often as I can,” adds Zeoli. “It’s a great picture-taking place, too.”

She posts her photos on Facebook to share moments with family and friends. Lately, she is selling her photos.

“I went to the Ann Arbor Art Fair one year and noticed all the amazing photos for sale,” she said. “I decided to sell my photos, too.”

She features her photographs through Fine Art America, which provides an online marketplace and fulfillment service as well as marketing services for artists and photographers.

Someday, she’d like to pursue the art market for her photography and write a coffee table book featuring her travels and photography.

Zeoli encourages others to travel but knows it’s not for everyone. “Some people don’t like the inconveniences, or they may be fearful of the foods they might have to  eat. Others, like me, want to experience everything they can. If it’s your passion, you have to go for it…like the old proverb, ‘Leap before you look.’ ”

— Story by Olga Bonfiglio for Lux Esto, the magazine of Kalamazoo College