Congratulations to the seven Kalamazoo College Chemistry Club members who won the annual Battle of the Chem Clubs last weekend at Michigan State University. Bri Leddy, Audrey Thomas, Chris Vennard, Liz Knox, Maria Fujii, Jake Sypniewski and Adam Decker competed in four rounds of chemistry trivia and laboratory-based games before taking on Hope and Olivet in the playoffs, which consisted of a speed titration and a Winter Olympics-themed race. 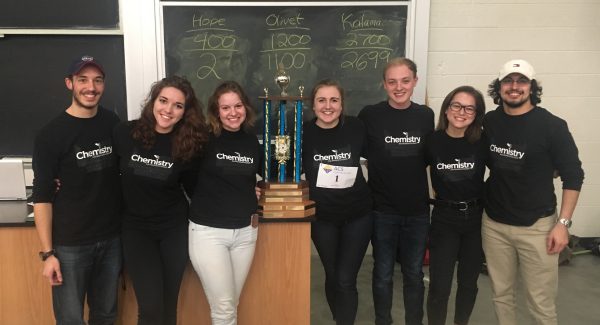 Twelve teams from Michigan including Michigan State, Aquinas, Wayne State and the University of Michigan-Flint participated along with the University of Toledo. The schools were not separated into size or public and private divisions, meaning the title was an overall championship. K’s representatives also finished with the fastest and most accurate speed titration, winning an award for that, too.

“We’re excited that we beat such tough competitors from both rival schools and large institutions,” Thomas said. “We showed we, as a small college, could hold our own against the best in the state. It’s nice to bring home a win, too, because it helps showcase our fantastic chemistry department in a good light to prospective majors.”