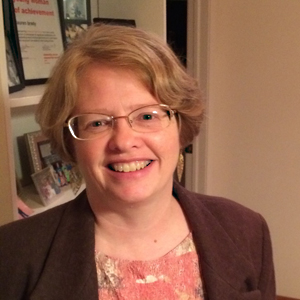 Kalamazoo College today named Alyce Brady, Ph.D., the Rosemary K. Brown Professor in Mathematics and Computer Science. Alyce has taught in those departments at Kalamazoo College for 22 years. She earned her bachelor’s degree from Bowdoin College and her master’s degree and Ph.D. from Rensselaer Polytechnic Institute. She teaches a variety of courses in computer science from introductory classes to advanced courses on programming languages, data structure, dynamic Internet apps and software development in a global context. Her research interests include the application of computer science to social justice (Alyce served as the Arcus Center for Social Justice Leadership Faculty Fellow from 2013-2015), the development of more effective computer science education exercises and opportunities for students, software design, academic computing applications and human-computer interfaces. In 2007 she co-authored a seminal article in computer science education, “A 2007 model curriculum for a liberal arts degree in computer science,” and in 2010 she co-wrote the article “Case studies of liberal arts computer science programs.”

The professorship was established with an endowed gift by Rosemary Kopel Brown and John Wilford Brown in 2001 as part of the College’s campaign, Enlightened Leadership in the 21st Century. The endowment was strengthened by another gift from the Browns during the recently completed Campaign for Kalamazoo College. Endowed professorships help ensure the presence of great faculty at K, and the faculty-student relationship is the cornerstone of the excellence of the K learning experience. The Rosemary K. Brown professorship funds “the position of an established teacher/scholar with demonstrated achievement and the promise of continued exceptional performance.” Rosemary and John have a deep and enduring connection with Kalamazoo College and Kalamazoo. Both served as trustees of the College. Rosemary is a lifelong mathematics educator who worked in several Kalamazoo Schools. John is the retired president, chief executive officer and chairman of the board of Stryker Corporation in Kalamazoo.

Endowed professorships do great and indispensable things for K. They confer a prestige that helps attract and retain the best faculty. The gifts that are their financial foundation free operational funds that an institution can use for other educational opportunities. And they provide the wherewithal for a great teacher to extend the power of his or her pedagogy and scholarly work. Case in point is the former Rosemary K. Brown Professor of Mathematics and Computer Science, John Fink, who retired in 2015. John used the endowed fund in many ways, to the benefit of students in the United States and abroad. He attended critical workshops and served in the Michigan Section of the Mathematical Association of America; he attended and accompanied students to meetings that allowed students to experience the culture of professional mathematics, he helped develop a middle school math outreach program in Kalamazoo and, with student involvement, sowed the seeds for a similar program in Ecuador. All these efforts, and more, were made possible the endowed professorship. Of K’s work in Ecuador John said, “It’s remarkable! The fewest crumbs of possibility inspire a feast of dreams.” The Rosemary K. Brown professorship allows great teachers to conceive and implement such possibilities and dreams.

Like John, Alyce is committed to projects that foster computer science and social justice together. As the ACSJL faculty fellow she helped launch and maintain a collaborative, social justice project to computerize academic

The appointment, announced today, becomes effective September. The College congratulates Alyce Brady, its second Rosemary K. Brown Professor of Mathematics and Computer Science, and the College is honored to have Rosemary’s name associated with Kalamazoo College in perpetuity.