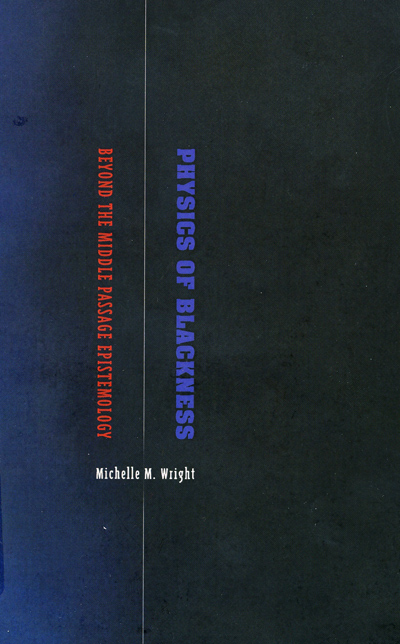 Kalamazoo College will present the Physics of Blackness Colloquium on March 31 and April 1. March 31 features a lecture (7 p.m. in Dalton Theatre) by Michelle M. Wright, Professor of African American Studies and Comparative Literary Studies at Northwestern University, and author of The Physics of Blackness: Beyond the Middle Passage Epistemology. Wright’s lecture is titled “Blackness by Other Names: Beyond Linear Histories.” On the next day (April 1, 5 p.m. in the Arcus Center for Social Justice Leadership) will follow an interactive event developed by the Beyond the Middle Passage Organizers. That group includes Justin Berry, assistant professor of political science; Nakeya Boyles ’16; Quincy Crosby ’17; Reid Gómez, the Mellon visiting assistant professor of ethnic studies; Allia Howard ’17; Bruce Mills, professor of English; and Shanna Salinas, assistant professor of English. “Wright looks at the argument of race, particularly Blackness, and the ways that argument plays out in economic, political and physically embodied ways,” says Gómez. “Her work will help us look at differences within difference and move beyond thinking in categories.”

According to Gómez, the colloquium will stress three themes, all of which relate to one another: horizontal connections instead of vertical frameworks; the inability of temporally linear progress narratives (which often structure the notion of Blackness) alone to realize the broad and complicated truth and meaningfulness of Blackness; and a “See Me-Hear Me” approach during the colloquium that will ask participants to enter each others’ lives in meaningful ways. Wright’s book uses concepts from physics to expand thinking and discussion beyond linearity that makes “it difficult to understand or accept people, places, or event that do not easily fit inside a single narrative,” explains Gómez. Toward that end Gómez has helped facilitate “The Physics of Blackness at Kalamazoo College,” a blog in the form of a mosaic that makes approaching the subject of Blackness nonlinear and dynamic.

Nonlinearity is the true nature of the physical universe, wrote Gómez in a summary of Wright’s book. Such nonlinearity doesn’t preclude all cause and effect, but instead complicates it. Gómez writes that Wright “cautions against cause and effect laws that make history solely the consequence of oppression, where Blackness only appears in terms of resistance to, or the direct result of, that oppression.” The ability to think and discuss freed from such overly narrow restrictions allows us to “reimagine choice and agency in relationship to Blackness,” says Gómez, “the choice to ’notice and wonder’ at what is left out of linear progress narratives, and to conceive of self outside those terms.”

The Beyond the Middle Passage Organizers group invites colloquium participants to help one another prepare for the event by sharing talking points, images and points of entry into Wright’s theory via Instagram _bmp._ and Twitter @_bmpo_.