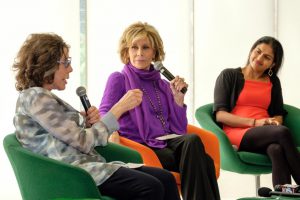 Actresses Lily Tomlin (left) and Jane Fonda (middle) discuss an initiative to raise the minimum wage of Michigan residents with Saru Jayaraman at the Arcus Center for Social Justice.

ROC United, a restaurant workers and workers’ rights group, brought Fonda and Tomlin to K for the issue-focused, non-partisan event. ROC United is a winner of the 2013 Global Prize for Collaborative Social Justice Leadership and partner with the ACSJL.

Fonda and Tomlin, stars of the Netflix comedy series “Grace and Frankie,” are participating in a series of ROC United fundraising and public-education events in Detroit, Grand Rapids and Ann Arbor this week. Fonda and Tomlin will speak out about the need for One Fair Wage in Michigan, and the importance of amplifying the voices and perspective of those who work in the restaurant industry.

The Restaurant Opportunities Center of New York was initially founded in New York City by Fekkak Mamdouh and Saru Jayaraman after September 11, 2001, to support restaurant workers displaced as a result of the World Trade Center tragedy.