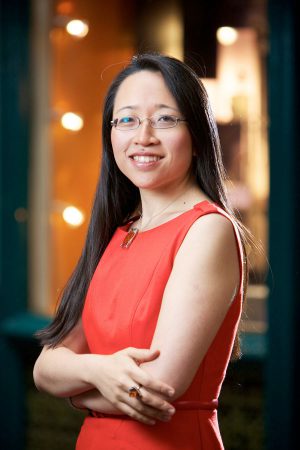 Eugenia Cheng was an early pioneer of math on YouTube and her videos have been viewed around 15 million times to date. She will deliver two lectures May 1 at Kalamazoo College.

A YouTube math pioneer, author, pianist and scientist interviewed on “The Late Show with Stephen Colbert” and featured in the New York Times, Wired and the Wall Street Journal will deliver two lectures on Wednesday, May 1, 2019, at Kalamazoo College.

Eugenia Cheng, Ph.D., the Scientist in Residence at the School of the Art Institute of Chicago, will address “Inclusion and Exclusion in Math” at 4:10 p.m. in Room 207 at Olds Upton Science Hall. This lecture, designed for math majors and faculty, will encourage less divisive conversations to explore why women are underrepresented in math.

“The Art of Logic,” part of the Jennifer Mills Lecture Series, will attempt to find the truth buried beneath sound bites, spin, memes, divisive arguments and “fake news” by teaching attendees to think like a mathematician to decipher what people are really saying. The lecture begins at 7 p.m. in Room 103 at Dewing Hall; it is free and open to the public.

Cheng’s work encompasses research in category theory, undergraduate teaching, authoring mathematics books for a general audience, public speaking, professional development for teachers, mathematical art and music. Cheng was an early pioneer of math on YouTube and her videos have been viewed around 15 million times to date. Her books, which will be available for purchase after the evening lecture, include:

Jennifer Mills ’82 earned a degree in math and physics from K. After graduating, she worked a few years as a teacher in the physics laboratory at the General Motors Institute, now Kettering University, before beginning graduate work in physics at the State University of New York, Stony Brook. Shortly before her death in 1990, Mills created a fund at K to support public lectures in science and math by women or minority speakers. The lecture series each year brings experts in the natural sciences, math, computer science, history, philosophy or sociology to the College.