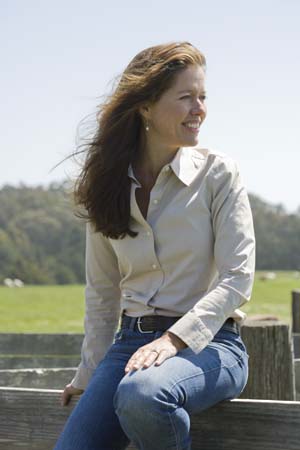 Why would a vegetarian defend beef? Nicolette Hahn Niman ’89, environmental lawyer, rancher, food activist, and vegetarian, does just that in her controversial new book, Defending Beef: The Case for Sustainable Meat Production, The Manifesto of an Environmental Lawyer and Vegetarian Turned Cattle Rancher, published by Chelsea Green in October 2014. Hahn Niman returns to the Kalamazoo College campus on April 27 (7 p.m., Stetson Chapel) for a talk and discussion on sustainable food production and farm animal welfare. The event is free and open to the public.

Hahn Niman’s first book, Righteous Porkchop: Finding a Life and Good Food Beyond Factory Farms (William Morrow, 2009), paves the path to her current work. Porkchop is an exposé of what ails BigAg, or big agriculture, the factory farms that Hahn Niman points out as major polluters across the planet, contributing to climate change, to the detriment of everyone’s health. It is also her love story, as vegetarian meets cattle rancher, Bill Niman, joining forces in marriage and business.

Defending Beef takes a further step. As Hahn Niman began her new life on the Bolinas, California, cattle ranch (the Nimans also raise heritage turkeys), she found herself drawn deeper and deeper into the lifestyle and the business. If at first she merely stood nearby and held out the tools for her husband to do his work, Hahn Niman gradually found herself in love with ranch life and fully involved with it. Her research into all things beef led her to write her manifesto.

“Environmentalists and health advocates have long blamed beef and cattle ranching, but it’s just not that simple,” she says.

“Meat, especially red meat, has been perceived as elitist,” she says. “It’s a strange way to view beef when about a billion of the world’s poorest people are dependent on livestock.”

Beef, Hahn Niman argues, can in fact play an important role in ending world hunger, even while helping to restore a balanced climate. She has presented her perspective in numerous articles in New York Times, Los Angeles Times, The Atlantic, Huffington Post, CHOW, and countless others, frequently stirring up dust. She is a frequent speaker at various food and farming events and conferences.

The culprits, Niman points out, are sugar, especially high-fructose corn syrup, and grain-based foods. Our consumption of sweeteners has spiked. While the great majority, around 70 percent, of heart attack victims have low cholesterol levels, usually associated with eating meat, many of these people are consuming much higher levels of sugar and processed foods.

“We’ve shifted how and what we eat,” Hahn Niman says. “We are eating a lot more fast food and processed food, and these are foods that are high in sugar and salt, another additive, and the body can’t metabolize these ingredients at these elevated levels. We’ve even changed how we eat—on the run, standing up, rather than at the dinner table. We need to reexamine how we eat in this country and get back to whole foods.”

In Defending Beef, Hahn Niman compares the grass-based, traditional family farm to the industrialized factory farms today. Family farms have not been able to compete, and many have bankrupted while factory farms continue to consolidate and grow ever larger. Not only are we losing a simpler, cleaner way of life, she writes, but with it we are losing the values of the traditional farmer and rancher. That includes sitting down at the dinner table in shared meals and conversation.

The grass-based farm should become the basis for a food revolution, Hahn Niman says. With industrialized factory farming come huge numbers of closely confined animals, and with that, crowding, disease, and lower (sometimes inhumane) standards of life. A corporation cannot care for a living animal in the same way that farmers and ranchers living alongside their animals can. The economics of the modern food industry, Hahn Niman states, require more and more processing. And while processed meat can indeed lead to health problems, unprocessed red meat, especially grass-fed, can contribute to good health.

“I believe strongly in good animal husbandry,” says Hahn Niman. “It ensures that life is worth living for that animal, but it also creates healthier food for us. Research shows that stress hormones affect the flavor and quality of meat. [On our ranch], we are there when the calves are born, we care for them and raise them, and we accompany them to the very end. Yes, it is difficult, but that’s why Bill, my husband, is present at the slaughterhouse, which reassures the animal, and making sure that we give our animals the respect they deserve. We have total oversight of the entire process and that’s why we have such confidence in the quality of our meat.”

On the Nimans’ BN Ranch, cattle are grass-fed only, grazing on approximately 1,000 acres of open pasture from the first to the last day of their lives. No chemical fertilizers, no pesticides or herbicides are used on the ranch, although the beef is not certified organic, primarily due to the prohibitive costs and burdensome processes required for certification. The Nimans supply their premium quality beef to high-end restaurants and specialty retailers.

“From the health standpoint, grass-fed beef has higher levels of omega-3s and other nutrients,” Hahn Niman says. “No weird additives or hormones.”

But then there is the health of the planet. Many environmentalists and vegetarians have argued against overgrazing, which disables land that might be used to grow more crops. They further contend that keeping livestock contributes to the carbon emissions and methane gases that lead to climate change. Hahn Niman disagrees.

Carbon dioxide, she notes, makes up the majority of agriculture-related greenhouse emissions. Keeping livestock on pasture, however, contributes little to such emissions because emissions come mostly from farm machinery and manufacture of agricultural chemicals, not animals. Absent the practice of crowding large numbers of animals together—which requires manure lagoons and has encouraged deforestation in order to clear areas for growing soy and livestock feed crops—animals actually contribute to sustainable living. Methane emissions from manure are minimal on traditional farms, where manure is not liquefied and quantities of manure, properly balanced with the amount of land, are worked back into the soil, enriching it.

The primary climate argument against cattle is enteric methane, in other words methane from their digestive processes. But Hahn Niman points out that U.S. Environmental Protection Agency official figures show the entire greenhouse gas emissions of cattle (for both dairy and beef) are around 2 percent of all U.S. emissions. “Two percent is not something to be ignored, but it’s manageable,” says Hahn Niman. “Agricultural colleges around the world are studying enteric emissions and have already discovered several ecological ways to significantly reduce them.”

“With well-managed grazing, cattle contribute to soil quality,” she says. “We’ve heard about overgrazing for years, but cattle actually stimulate the growth of plants with their pruning. Their hooves press seeds into the ground. Research shows that where cattle are allowed to graze, biodiversity improves and carbon sequestration (taking carbon out of the atmosphere and returning it to the soil) is enhanced. Soil feeds many forms of life, starting with microorganisms, and there are countless positive downstream effects.”

Whereas growing crops destroys natural habitat and the wildlife living on it, grazing cattle is often the best use of land unsuitable for growing crops.

“For many of the poor in the world, keeping livestock is their most important food source,” Niman says.

Niman also addresses diminishing water supplies and how much of that goes for livestock (less than you might think), the need for a national food policy (we have a policy for most everything else), and why being a meat-eater is a morally legitimate choice (as long as the meat comes from sustainable farming practices).

As for being a vegetarian, Niman says it is a personal choice. “If you are choosing vegetarianism because of health concerns or concern for the environment, well, then your reasons are poorly grounded.”