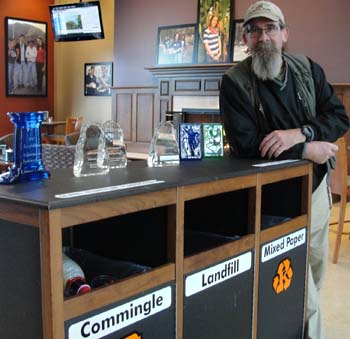 The work of Rob Townsend has been key to the recycling culture on K’s campus.

RecycleMania 2015 is over, and if you didn’t know that (or if you weren’t aware the contest had even begun) that’s because for the second consecutive year the College has competed without promoting the contest–sort of a test to see the degree to which R (for recycling or Rob, as in Rob Townsend) has become part of K’s DNA. The results are good.

Kalamazoo College recycles far more than half of the solid waste it produces, according to Associate Vice President for Facilities Management Paul Manstrom. “We placed very high in many of the categories despite the fact we did not promote the contest at all on campus–unlike most other schools that competed,” said Manstrom. “Our performance is a testimony to the recycling culture that Rob Townsend has built at K over the years. While some schools need the publicity of a contest to up their recycling statistics, it just comes naturally at K.” This year the College had three top-ten finishes out of eight categories. K’s ranking (and number of participating institutions) by category follow: Grand Champion–32nd (233); Per Capita Classic–10th (334); Gorilla–201st (334); Waste Minimization–116th (148); Paper–20th (141); Corrugated Cardboard–4th (163); Bottles & Cans–3rd (142); and Food Service Organics–129th (175).

RecycleMania is a friendly competition and benchmarking tool for college and university recycling programs to promote waste reduction activities to their campus communities. During an eight-week period, colleges across the United States and Canada report the amount of recycling and trash collected each week and are in turn ranked in various categories based on who recycles the most on a per capita basis, as well as which schools have the best recycling rate as a percentage of total waste and which schools generate the least amount of combined trash and recycling.

Kalamazoo College earned silver-level recognition for its 11 years of RecycleMania participation, and it’s unlikely to rest on the excellence of its tradition. Said Townsend: “The data shows our numbers slipped a bit from the previous year. We won’t get complacent.”