News and Events » News Stories » The Gold of Sound
Tweet

Lindsay Worthington ’17 took home the gold by winning the award for “Best Sound” in the category “Theatrical Design Excellence” at the Kennedy Center American College Theatre Festival regional competition. She continued to Nationals and placed 3rd among the 9 sound designers selected from across the U.S.”

The theatre arts and music double major, (and Spanish minor) from Bethesda, Maryland, has been active in a plethora of theatrical productions on campus. She also sings in the a Capella group Premium Orange. Every winter she writes and directs Pro-Voice with Karyn Boatwright’s “Feminist Psychology” class. Pro-Voice is an oral telling of the experiences of individuals who have had abortions.

KCACTF is a national competition that involves about 20,000 students from 700 colleges and universities and (both graduate and undergraduate). A series of eight regional competitions determine the national participants. Each year Kalamazoo College sends its most talented students to the Region 3 event in Wisconsin.

At this year’s regional competition Worthington presented a visual aid, conducted an oral presentation of her work and held a Q&A before a panel of judges. She won the award for “Best Sound” sending her to the national festival and competition. 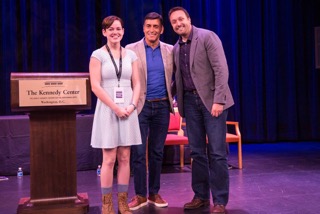 “A struggle in my field is the difficulty to visually and verbally explain sound,” says, Worthington. “So this festival and competition have been a wonderful way to enhance my public speaking and my abilities to express my creative ideas as a sound designer.

“For the theatre department, each K student’s individual success represents a community effort and a great experience,” Worthington adds. Associated with the festival are a series of workshops in both technical and acting categories, that are open to anyone.

K’s theatre department has a strong record of success at KCACTF. Last year Grace Gilmore ’15 was a finalist in the acting category, and Jane Huffman ’15 won first place in Nationals for the “critics” category.