It was always going to happen.

Connor Grant ’18 and Kelsey Corless had known each other since seventh grade in Lake Orion, Michigan. They were high school sweethearts. And though he went to Kalamazoo College while she attended Grand Valley State University, they remained committed to one another. 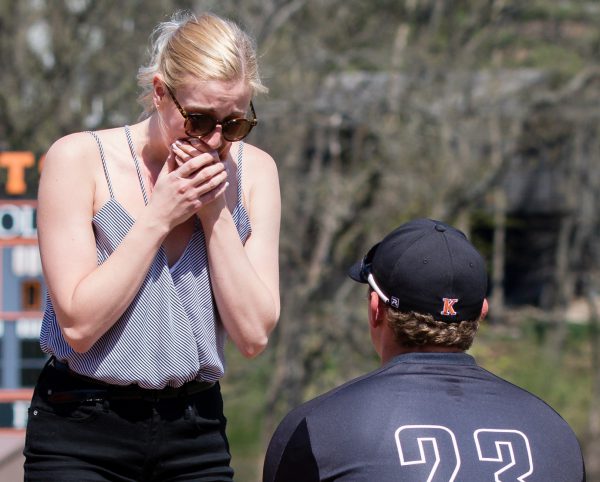 “We talked about it and she knew something like this was coming,” Grant, a first baseman for Kalamazoo College’s baseball team, said of his engagement to Corless.

The inevitable, however, didn’t have to be predictable. Grant wanted to make sure his proposal was a special — and very memorable — moment.

So before last weekend’s Senior Day doubleheader at K’s Woodworth Field, he went to Head Baseball Coach Michael Ott and asked for permission to carry out a secret plan. It was crafted to make sure that when he made his proposal, not only Corless but both their families would be there and that she would have no clue as to what was about to happen.

Grant’s plan revolved around the Senior Day ceremony, which takes place during the break between games. The graduating players line up along the third base line, then are called one by one with their families and friends to home plate, where they receive a bat engraved with their name and position. Grant, the team captain, deliberately asked to be called last so as not to overshadow his fellow senior players and he made sure he had their assent.

He also arranged it so that when his roommate, catcher Alex Fultz ’18, presented him with the bat, he would slip him the ring, as well. The announcer would then set up the moment, saying, “This is more than a Senior Day …”

Grant’s proposal to get hitched went without a hitch, and the appropriately stunned bride-to-be said yes. And both of their families got to witness the engagement, as planned.

“I had a nervous day leading up to it,” Grant said. “But other than that, it went perfect.”

For the crowd, one of the biggest of the season, it was an unexpected treat.

“Their reaction was amazing,” Grant said. “People were ecstatic for us. All the seniors’ families were there and got to be a part of it.”

“I think there were some people wiping away tears,” said Ott, adding that the opposing team joined in the cheers and applause.

The wedding date has yet to be set, but Grant said he expects it to occur sometime next summer, after he and Corless get settled in to post-college life. Corless last month received her degree from Grand Valley in management information systems, and Grant, a business and economics major who graduates June 17, is set to start work this summer as a mortgage banker with Quicken Loans in Detroit.

Ott said the proposal “was a really cool moment” for the baseball program, and “definitely a first.”

It capped a weekend when the Hornets finished their season with a sweep of Olivet College, making it even better. And despite his nervousness, Ott said, Grant drove in four runs in the afternoon’s first game.

For Grant and Corless, Ott said, “I’m sure it’s something they’re going to remember.”

He said it was also a reminder for Grant’s graduating teammates that, although their collegiate athletic careers are coming to an end, their lives—like Grant and Corless’ together—are just getting started.

“I think it was a moment that was a little bit bigger than baseball,” Ott said. “It provided some perspective about what’s really important.”

He said he was proud to have been able to make the surprise proposal possible for Grant, who is fourth on the list of Hornets baseball players for most games played.

Grant said being at a school like K allowed him to forge a strong relationship with his coaches and fellow players so he could share his big moment with them.

“That’s what made it possible,” he said.