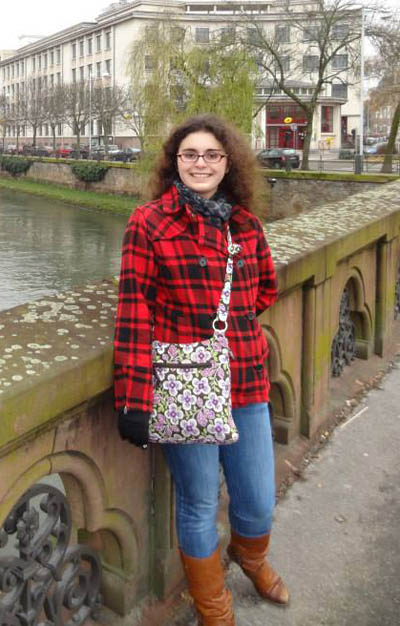 This week Sara Stack ’15 will break from her study of insects (she is working on a master’s degree in entomology at Purdue University) to travel to San Francisco and present a classics paper at the 2016 annual meeting of the Archaeological Institute of America (AIA). From insects to classics!? Therein hangs a liberal arts tale, vintage Kalamazoo College.

Stack’s paper–“Princess, Prisoner, Queen: Searching for Identity and Agency in the Life of Kleopatra Selene”–is one of only four undergraduate research projects selected for presentation at the AIA meeting.

Kleopatra Selene is one of history’s forgotten women, mentioned only marginally (if at all) in the history- and world-changing story of her famous parents, the Roman general Mark Antony and the last queen of Egypt, Kleopatra VII. Theirs was a story that crowded the stage of the entire Mediterranean world of their time, a story that has inspired countless historical and literary interpretations from Plutarch to Shakespeare to a recent bestseller biography by Stacy Schiff.

“I’ve always been very interested in history, particularly dynamic historical women,” said Stack, who majored in biology and religion.  “Kleopatra VII  has been a particular favorite of mine since childhood; my favorite book is a 1000-page novel called The Memoirs of Cleopatra. Because I’m so familiar with her mother, I’ve been aware of Selene for a long time, but I started to wonder about her as a historical figure in her own right.

“The most interesting part of my research was how strongly Selene’s political agenda and identity were influenced by the events of her childhood.”

After her parents’ defeat by Octavian (later the Roman emperor Augustus), Selene became Augustus’ prisoner and political pawn. He marched the 10-year-old girl in his Egyptian triumph through the streets of Rome as a symbol of her fallen dynasty and conquered nation. He gave her to his sister to raise and later arranged her marriage to Juba, king of Mauretania (today’s Algeria). “As the queen of Mauretania she very clearly identified herself as a Ptolemy (her mother’s royal house) and a Hellenized Egyptian queen,” said Stack. “She commissioned coins in her own right, not just in conjunction with her husband, and portrayed herself with the imagery and titles of her mother, Kleopatra VII. To me this indicates that she never forgot her heritage or her family, and used her power to maintain their legacy.”

Haeckl had equal praise for Stack’s research paper and for the liberal arts ethos from which it took wing. “At K we value the breadth and depth of academic course work and the Senior Individualized Project. It’s hard to find a more dynamic example of that than Sara, with her curiosity and hard work in biology, religion and classics.”

Stack’s biology SIP studied the effect of the emerald ash borer, an invasive beetle that kills ash trees, on the biodiversity of a family of beetles known as Carabidae. “I really enjoyed my SIP research, and it was ultimately what made me fall in love with entomology and got me into graduate school,” said Stack.

She obviously also enjoyed her classical research. “She unified and analyzed through a feminist lens the scattered corpus of ancient material culture and texts relating to Selene,” praised Haeckl, work that yielded a new and original understanding of Selene’s “increasingly empowered agency and self-identification as a North African queen.”

Haeckl also presented research at the AIA annual meeting. Her work posits a specific identity (the Emperor Caracella) of a painted limestone statuette depicting a falcon-headed human figure in the armor of a Roman imperator. Haeckl’s paper, “Caracalla as Birdman? Proposing an Imperial Identity for the British Museum’s ’Horus in Roman Military Costume,” explicates the iconography of the statue (Horus was the Egyptian falcon-god) in terms of both the public image Caracalla cultivated (as an ordinary Roman soldier and latter day Alexander the Great) and a specific visit Caracalla made to Alexandria in 215.