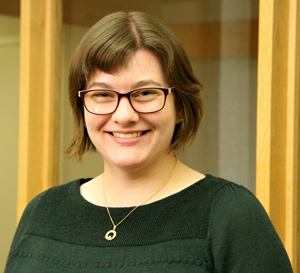 “God, grant me the serenity …”

It’s been spoken by millions seeking inspiration and solace, just twenty-six words that form the backbone of many 12-step programs, including Alcoholics Anonymous. It was chosen by World Almanac as one of the “10 Most Memorable American Quotes” of the 20th Century:

So when Fred Shapiro, a law librarian at Yale University, called into question the authorship of the Serenity Prayer it caused a bit of a stir. Sarah Guzy ’10 found herself playing an important role in Shapiro’s quest to find who actually wrote one of the world’s most recognizable prayers.

In 2008, Shapiro published a story in Yale’s alumni magazine. He argued that Reinhold Niebuhr, a towering American theologian who is widely credited with authoring the prayer, may not actually have written it. Shapiro cited newspaper articles and a book in which versions of the prayer (written by women) were seen as far back as 1936. Niebuhr’s daughter, Elisabeth Sifton, had written a book in 2003 in which she said her father was the original author of the prayer, first using it in 1943.

In the years that followed his article Shapiro spent more time investigating the prayer’s origin. That’s where Guzy, a graduate student studying religion at Harvard University’s Divinity School and staffer at the school’s famous Schlesinger Library, entered the exploration. Shapiro needed someone to look through the diaries of Winnifred Crane Wygal, who knew Niebuhr and had a version of the prayer attributed to her in a 1933 Santa Cruz Sentinel newspaper article.

“I wasn’t sure what was going to happen,” Guzy says, adding she spent 20 hours going through the diaries. “I was worried there would be nothing to shed light on the prayer’s provenance, but there was something. In fact the diaries were the key to answering the question. The toughest part? Trying to read Wygal’s handwriting.”

Shapiro wrote of Guzy’s findings: “Schlesinger’s staffer, Sarah Guzy, struck gold when she read Wygal’s diary entry for Oct. 31, 1932. Wygal wrote there: ‘R.N. says that ‘moral will plus imagination are the two elements of which faith is compounded. The victorious man in the day of crisis is the man who has the serenity to accept what he cannot help and the courage to change what must be altered.’”

Although not a mirror image of the prayer we know today, the basic elements were there, according to Shapiro. Niebuhr was the author after all, he wrote.

“I was really surprised about the buzz,” Guzy says. “Being in divinity school, it’s nice of him to mention me. I wasn’t expecting that.”

Shapiro recanted his doubts about Niebuhr in a story that spread widely, winding up in the Washington Post, Chronicle of Higher Education, and the Huffington Post, among others. Guzy’s efforts were cited in each of those stories.

And what of Sarah Guzy’s “provenance,” so to speak. If it wasn’t for one of her K professors, Guzy might never have been asked to go through those diaries.

An art history and religion double major at the College, Guzy’s academic trajectory was altered profoundly when she began taking classes with Assistant Professor of Religion Shreena Gandhi.

“She brought interesting frameworks of racial and gender issues to class. It was the first time I had really encountered them,” Guzy says. “It was so exciting, so different than other religion classes. I really connected with her. I never intended to study religion, but I loved the classes. K encourages that exploration.”

Guzy studied abroad in Bonn, Germany, and after graduation spent a year in Costa Rica, working in international education, an endeavor helped along by her work at the College’s Center for International Programs. When she returned home, she wondered what she should do next. Gandhi offered some advice.

“I said, ‘Why not look at Harvard?’” says Gandhi, who earned her master’s degree in religion there. “Sarah had the interest and the intellect. Her experience and her writing and ideas are what got her in.”

Guzy’s time in the Schlesinger Library has been nothing short of inspiring, she says. The library, home of the nation’s largest collection of documents and materials detailing women’s lives and contributions to American society, is a treasure trove of letters, telegrams, diaries, books, objects and plenty of interesting people.

In her time there, she has unpacked Julia Child’s silver soup ladle and soup tureen from Tiffany, scanned letters from Sigmund Freud, ate birthday cake with Judy Chicago, chatted-up Gayle Rubin, and read from the original papers of Adrienne Rich, a poet she first encountered at K. She even received a scan order for a telegram written by a K professor in the 1970s, she says.

Guzy applied to K “because the college had a funny name,” she says, and was included in the book: “Colleges That Change Lives: 40 Schools That Will Change the Way You Think About Colleges.”

A native of Evanston, Ill., she came to K with her mom, almost on a whim. They just showed up–no campus tour scheduled, no professors or admissions officials lined up to talk with. A few K students approached the two and asked if they needed directions, then wound up taking them on a two-hour tour of the College, Guzy says.

That friendly openness impressed her immediately.

“There are similar schools that look the same on paper. But at K the feeling on campus was markedly different,” she says. “I was sold the minute I stepped on campus.”

That inclusive spirit extended to many of her other professors, she says.

“There was an encouragement to connect with your professors,” she says. “We would go to dinner;I would dog sit for them. I still maintain a lot of relationships. The environment there fosters the ability for making meaningful bonds because the professors care about the students, not just their research.”

She adds, “There’s a sense of the importance of the student. Faculty (at K) are so much more approachable than even those at Harvard, many of whom are focused on their personal brand. It’s not like that at K–it’s about relationships.”

There’s also another source of her admiration for the College: the Arcus Center for Social Justice Leadership. While a student Guzy participated in the search for the center’s first executive director.

“I’m very proud of K. The (Arcus) center is an amazing thing,” she says. “It speaks to K’s commitment to giving voice to those not given voice in society generally and in institutions of higher education specifically.”

The College was also the place where Guzy was first broadly exposed to issues of inequality related to gender, socioeconomic status, race and sexuality, matters she learned about extensively in Gandhi’s classes. It’s no surprise, then, that Guzy’s academic research revolves around gender dynamics in colonialism, and how women exerted their influence in patriarchal societies, through witchcraft in Africa and Latin America, or voodoo in New Orleans.

“Sarah has always been an outspoken feminist, and outspoken on social justice issues broadly,” Gandhi says. “She’s interested in how things work. You start seeing inequity and oppression and begin to develop ideas on how to solve it. She always had that passion, and now it’s blossoming in her. I’m super proud of her.”

As for the future, Guzy says she has no plans to pursue additional academic endeavors after earning her master’s degree. She wants to get to work.

“There’s a huge trend in sending students abroad, but with not a lot of preparation and training to be culturally sensitive,” she says. “The more attuned to other cultures you are, the more the student gets out of the experience, and the more those in the host nation understand us as well.”