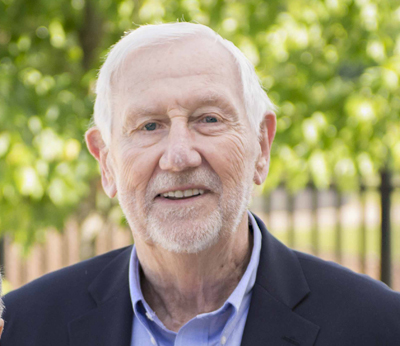 Tom Kreilick ’60 in June 2016, when he was honored with a Citation of Merit Award

At Kalamazoo College the bridge between love and excellence is often a planned gift. Within the past two weeks, K has received two such gifts—one that supports excellence in the faculty; the other excellence among students. In both cases the donor made careful plans for the gift some twenty years ago.

Thomas Kreilick ’60 made arrangements for a charitable remainder trust during the College’s campaign, Enlightened Leadership, which occurred in the late 1990s and early 2000s. Mr. Kreilick, a successful businessman who served in several top-level executive positions during his career, died in July of 2016. The trust he established will fund the Thomas K. Kreilick Chair in Economics, a testament to his commitment to the excellence of K faculty.

In 1997, the year her husband died, Virginia Harlow made plans for several charitable gift annuities that would, upon her death, enhance  a scholarship named for her husband–alumnus and emeritus board member (and board chair) I. Frank Harlow ’39, who served as a vice president and general counsel at Dow Chemical Company. Her intent was to honor his love of K by helping ensure that great students would enjoy and contribute to the excellence of the learning experience there. Virginia Harlow died recently, but her gift and its intent live through the I. Frank Harlow Scholarship.

“Planned gifts such as these are votes of confidence in the excellence of faculty and students at Kalamazoo College,” says Vice President of Advancement Al DeSimone. “Mr. Kreilick and Mrs. Harlow worked with K years ago to carefully plan these important contributions. The results will help sustain excellence at K in perpetuity.”